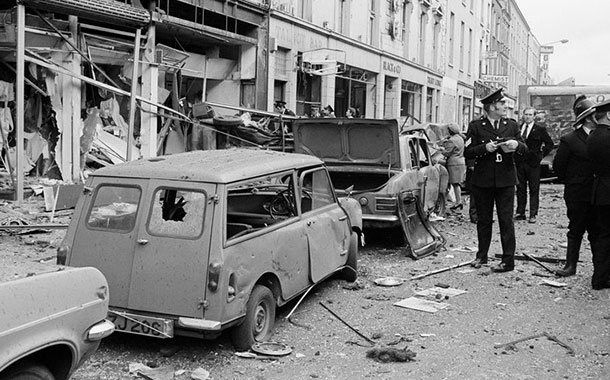 Deputy Maureen O’Sullivan asked the Tánaiste and Minister for Foreign Affairs and Trade if he will report on discussions he has had since becoming Minister with his UK counterparts regarding legacy issues, particularly regarding the Dublin and Monaghan documents and the failure of the UK Government to release files, and his plans to address the matter at future meetings in 2018. [14049/18]

Deputy Maureen O’Sullivan: Will the Minister report on discussions he has had since becoming Minister with his UK counterparts regarding legacy issues, particularly those relating to the Dublin and Monaghan documents and the failure of the UK Government to release files and how this can be addressed at future meetings in 2018?

Deputy Simon Coveney: Dealing with long outstanding issues relating to the legacy of the conflict in Northern Ireland is of the utmost importance to the Government. The programme for a partnership Government highlights this priority with specific reference to implementation of the all-party Dáil motions relating to the Dublin-Monaghan bombings.
I acknowledge also those across the House who work on a cross-party basis with the Government on this issue and the tireless efforts of Justice for the Forgotten. I will be meeting with Justice for the Forgotten in the coming weeks to hear its views and update it on the Government’s continuing engagement on legacy issues, including with the British Government on the Dáil motions.
The all-party motion on the 1974 Dublin-Monaghan bombings that was adopted by the Dáil on 25 May 2016 has, like those adopted in 2008 and 2011, been conveyed to the British Government. These motions call on the British Government to allow access by an independent, international judicial figure to all original documents relating to the Dublin and Monaghan bombings, as well as the Dublin bombings of 1972 and 1973, the bombing of Kay’s Tavern in Dundalk and the murder of Seamus Ludlow. The Government is committed to actively pursuing the implementation of these all-Party Dáil motions, and has consistently raised the issue with the British Government.
I am actively engaged with the British Government on an ongoing basis on this issue, as are officials from my Department. I discussed the matter on a number of occasions with the former Secretary of State, James Brokenshire, and I will continue to pursue the issue directly with his successor Karen Bradley.
As part of this engagement, the Government underlines that the Dáil motions represent the consensus political view in Ireland that an independent, international judicial review of all the relevant documents is required to establish the full facts of the
Dublin-Monaghan atrocities. I have also advised that the absence of a response from the British Government is of deep concern to the Government and indeed this House and I have emphasised the urgent need for such a response. The Government will continue to engage with the British Government on the request relating to the Dublin-Monaghan bombings and pursue all possible avenues that could achieve progress on this issue consistent with the request made by this House.
On the broader legacy issues, we are putting together legislation that can allow for hearings to be heard for inquests in Northern Ireland relating to some of the other legacy cases and hearings that will be taking place so that we can essentially have a cross-jurisdictional hearing system in the High Court in Dublin to ensure that Ireland does everything it can to make sure that any information linked to legacy cases can be accessed and fully heard and understood in the context of hearings.

Deputy Maureen O’Sullivan: I cannot but be struck by the irony there. We expel a Russian diplomat. Leaving aside the threat to our neutrality, I will go back to the Minister’s words. He said that Ireland had a choice to either show active solidarity with our closest neighbour or sit on our hands and do nothing. That is what British Governments have been doing for almost 44 years. They have sat on their hands and done absolutely nothing on this issue. There is no indication that the British Government will reciprocate the solidarity the Minister is anxious to show regarding that other situation. The language of the Minister’s reply is the same language I have been getting from other Ministers. It is all very nice. The Government is going to actively pursue the matter, it is a major priority, there is a commitment in the programme for Government, the urgent need, deep concern, etc., but nothing has happened. It is almost as if it is a case of wearing down the relatives and Justice for the Forgotten so they will give up and go away but they are not going to give up and go away. The British Government has shown absolute contempt for the three motions that have been passed here.

The Tánaiste: I share the frustrations that have just been outlined. I am happy to reconstitute the cross-party group. I spent some time with victims of atrocities and their quest for the truth is powerful. Hopefully, we will soon see an opening of a public consultation process in respect of the introduction of new legislation consistent with the Stormont House Agreement in terms of legacy structures, inquests and the funding required to see that through. It is in that context that we will continue to pursue for the families concerned and those advocating for them the reasonable requests that they have.
It is suggested that some may think the families will give up and go away. I do not believe they will. I assure the Deputies that the requests coming from the Irish Government in respect of this issue are not going to go away, either.