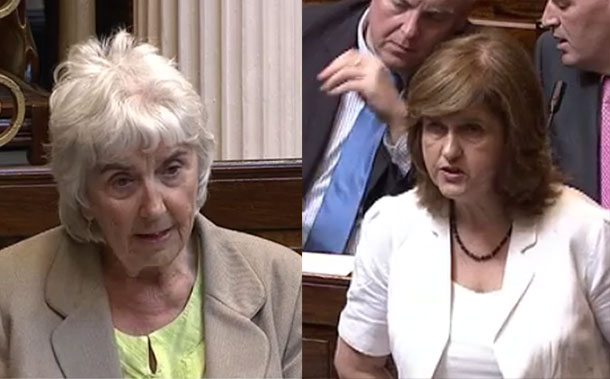 62% increase in the number of children in homeless services

Maureen O’Sullivan (Dublin Central, Independent)
I wish to discuss the issue of children. We have had appalling examples of mistreatment of children in the past. We had the Magdalen laundries, the industrial schools and mother and baby homes. We have seen abuse in families, by members of the clergy and in swimming circles. The children involved were deprived of innocence, laughter and fun, all of which should be associated with childhood. We have had commissions, reports and inquiries. While life is better for the majority of children today, I can guarantee that in 20, 30 or 40 years time we will have reports, inquiries and commissions to deal with the way certain children are treated today. I am talking about children in homeless and direct provision accommodation.
We are told that one third of all asylum seekers in those conditions are children. They can be there for anything between one and seven years. The recent first quarter report by the Dublin Region Homeless Executive was disturbing. While there is movement out of homelessness, there is an increase in the number of people becoming homeless. For example, there has been a 62% increase in the number of children in homeless services since June.
Neither set of children is living in a natural family environment. There are issues around safety, living in confined spaces and food, given the fact that the children are reliant on fast food with high fat content levels. We know of the country’s difficulties with obesity. There is no space to play and there is a lack of stability, as the children are being moved from one homeless accommodation to another. More displacement is expected because we are approaching the high tourism season.
There are also issues with schools. Either children must travel long distances to their original schools or they must move schools. One can imagine a child entering a new school, being asked where he or she lives and replying that it is in the bed and breakfast or hotel down the road. There is a stigma. We are storing up severe psychological, emotional and personal developmental difficulties for these children.
Recently, the Children’s Rights Alliance awarded the Government a C on the question of children. Two days ago, the European Commission repeated its call for Government action on child poverty and child care. Will the issue of homelessness, particularly as it relates to children in inappropriate settings, be viewed as an emergency of great urgency before more damage is done to the children of this country?

Joan Burton (Minister, Department of Social Protection; Dublin West, Labour)
What I want to say to Deputy Maureen O’Sullivan is that people having to register as homeless should be the absolute last resort. It is extraordinarily and exceptionally difficult for families that move into temporary accommodation such as hotels to look after their children properly. We want families with children in homes that they can call their own and where they do not need to be in a hotel or hostel-type environment. I agree with the Deputy that it is a very difficult situation for the children. It is an even more difficult situation for the parents looking after them and attending to them.

Maureen O’Sullivan (Dublin Central, Independent)
I wish to highlight a number of other aspects by referring to a home of which I know that has been providing accommodation for women who have been abused or made the difficult journey out of addiction and into recovery. Fifteen women live in the house. Incidentally, it is in danger of losing some of its funding. Between the 15 women, there are 11 children who are in care. The women are now in a position to take their children out of care and back into a family home, but they do not have accommodation. This is another group of children who are badly affected by our housing crisis. Perhaps the motive for those women who are on their recovery journeys out of addiction is to get their children back. Seventeen year olds and 18 year olds are coming out of care for whom the HSE cannot access accommodation.
I am involved with another group that works in the Dublin area with homeless women who are pregnant or have just had their babies. The group is receiving repeated calls from maternity hospitals about taking women in, but it only has one set of premises. One of the women who has been there for a number of months is ready to move on, but there is nowhere for her to go. She is depriving someone with a newborn in the maternity hospital of a place with the group. A woman from Kildare with a premature baby cannot get anyone in Kildare to accept rent supplement. She is seeking a place in the house in Dublin.
There are 21 supported accommodation places for pregnant women or women with babies in Dublin who are homeless. We have children in care because of homelessness. This statistic is not being taken into account. If we examined the cost of foster care as opposed to the cost of providing homes for people, there would probably be a cost saving. Under the Constitution, our State guarantees protection for the family. The family is “indispensable to the welfare of the Nation”. I listened to all that the Tánaiste stated. In time, those solutions will make a difference. In the meantime, though, the reality for those in emergency accommodation like bed and breakfasts and hotels, particularly children and the other groups that I mentioned, is appalling.

Joan Burton (Minister, Department of Social Protection; Dublin West, Labour)
So far this year through the Department of Social Protection there have been 4,500 negotiated rent agreements in respect of which we are paying a rent supplement to new families and individuals. The rent supplement provision is a very important service for families.
The Deputy and her colleague beside her were members of Dublin City Council. Dublin City Council has had the practice of closing large volumes of accommodation units when they become vacant. Local authorities have been heavily resourced by the Department of the Environment, Community and Local Government, by the then Minister of State with responsibility, Deputy Jan O’Sullivan, and more recently by the Minister for the Environment, Community and Local Government, Deputy Kelly, to bring these back into use.
In the case of a number of the families about whom the Deputy is speaking, accommodation where the empty properties have been redone are in locations where there is other council housing and they would be highly acceptable, as I know and the Deputy knows, to many of the people concerned provided they come on stream as fast as Dublin City Council can do that. Through the protocol with the housing organisations and the support services, we have made provision for up to 1,500 agreements. In addition, across a range of local authorities new people coming in get the housing assistance payment, HAP. That is also working.