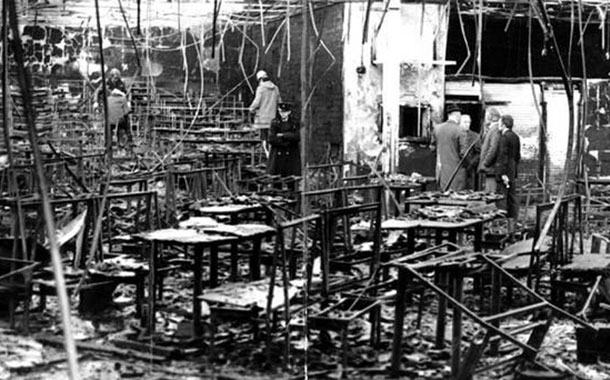 An investigation which will examine new evidence around the cause of the Stardust fire has been passed by 94 votes to 50. Not a full Commission of Investigation, however I want to acknowledge the work and that of Deputy Broughan and the Minister of State, Deputy Finian McGrath, because they have been steady and persistent voices in respect of this matter.

The fact is that, 35 years on, those bereaved by what happened in the Stardust still have questions but they do not have answers. St. Valentine’s day is associated with love and romance, not death and tragedy. I remember that weekend very vividly. I recall the stories coming out and the fact that the pain and anguish were intensified as the weekend progressed and more details emerged. I also remember having attended events in the Stardust, so I could very easily visualise what had happened. The grief was compounded by the fact the victims were all from the same area and that there were families who lost more than one member.

I dislike the word “closure” because it seems to suggest there can be an end to the grief at the loss of a loved one and I do not think that can happen. However, there is no doubt that if family and friends have answers to their questions and have a full picture of what happened, it does ease the grieving process. That has not happened in the case of the Stardust. Unfortunately, we have a poor record in this country when it comes to establishing and revealing the truth. How long did families and individuals wait in the context of the Magdalen laundries? The families of the victims and survivors of the Dublin and Monaghan bombings over 40 years ago are still waiting for answers.

The Stardust tragedy was the worst of its kind in the history of the State, with 48 young people losing their lives in appalling circumstances. We can imagine those young people struggling to escape and their consternation at perhaps getting to a fire escape to find chains around the bars. We can imagine the failure of the lighting adding to the panic and confusion inside. The windows were not an option because there were bars and blades around them. The rescue services outside were frustrated because they could hear and see what was going on but they could not reach those inside. It is important to acknowledge all the work of the rescue services.

Afterwards, it was a question of finding out what happened and who was responsible. We know of the Coolock Garda investigation, the tribunal of inquiry and the issue of arson, which allowed the owners to pursue a claim for quite hefty compensation. The “Prime Time” programme in 2006 cast doubts on some of those findings. That was followed by Mr. Justice Paul Coffey’s independent examination, which found no evidence of the fire being started deliberately but identified breaches of fire safety regulations. We know there were alterations to the initial Coffey report, which, in itself, necessitates a full and independent inquiry for the relatives.

The families have never given up, which is a great credit to them, and they have recent research which shows there is new evidence. A researcher has listened to the witnesses who were both inside and outside the Stardust, has looked at inaccuracies in the map of the building that was used at the tribunal and has examined the 999 calls. There are many questions.

The motion noted that the Government was looking for new evidence and I think that has now been brought forward. The relatives handed in a list to the Attorney General’s office a couple of months ago and they are still awaiting a response. Given all of the inconsistencies and questions regarding the original findings and the changes in the findings, the only way forward is a comprehensive and independent investigation. I am aware of the talks people have been having with the relatives and the Government amendment states that new evidence will be assessed by an independent person who has the trust of the families. If that independent person confirms this new evidence, there will be a full commission of investigation. However, that cannot be a further delaying tactic in regard to establishing the truth. Mr. Justice Coffey’s report in 2008 indicated the need for an inquiry. For me, it is not a matter of what anybody in the Dáil wants, it is what the families want, what they deserve and what they are owed. It is a matter of national interest and not just for the people of north Dublin.