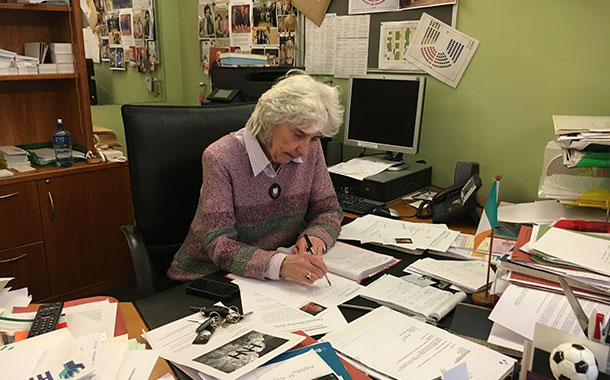 Why I’m in favour of repealing the Eight Amendment

The speech I made in the Dáil Feb, 2015 when debating the Protection of Life in Pregnancy (Amendment) (Fatal Foetal Abnormalities) Bill 2013

Like everyone else, I have been receiving e-mail and correspondence in abundance and have tried to read all the correspondence that came to me personally. Moreover, I have read extensively from what has been produced in the media, as well as listening to and reading what was discussed and presented at the health committee’s proceedings. One obvious point concerns the diverging public opinion on this issue, as well as the diverging medical and legal opinion. I do not believe that at this point in time, Members could possibly have agreed on a Bill that would suit and be agreeable to everyone, as well as to all the aforementioned divergent opinion.

At the outset, I express my support for the right to freedom of speech and the right to freedom of opinion and acknowledge the deeply-held views of those who express their opinions on the subject, while also disliking the methods certain people used in expressing that opinion. As for the diverging opinion on whether it is necessary to legislate for the X case or otherwise, from the Bar Council approximately 2,300 barristers have acknowledged their divergence of views. Equally, 864 members of the College of Psychiatrists of Ireland also have diverging views in this regard, as have doctors, social workers, counsellors and psychotherapists. It has been interesting to consider the statistics and reports being used by the opposing sides in the debate to confirm their views, as the same statistics and reports are being interpreted differently and there always will be some expert opinion that will be found to back up one’s own views. However, I wonder where the issue would be now, were it not for the sad and untimely death of Mrs. Halappanavar and her baby? Members are aware of how long this issue has been debated. It has been subjected to referendums, Supreme Court cases, working groups, a Green Paper, an all-party Oireachtas group that deliberated and took submissions over 12 months but which failed to reach a consensus, the recent expert group report and then the deliberations of the health committees. However, the tragedy of Mrs. Halappanavar’s death created the impetus for the current position whereby Members are debating the Protection of Life During Pregnancy Bill 2013 and I acknowledge the role of the Government in this regard.

I am struck by a terrible irony that Mrs. Halappanavar and her husband probably came to Ireland for a better life than they would have had in India. Moreover, they came to a country with very fine medical facilities and in which pregnant women are very well looked after. They came from a country where women are not treated in an equitable way, in which there are forced child brides and in which the caste system leads to girls and women being treated appallingly. Consequently, it is very sad that Mrs. Halappanavar lost her life here, as is the reason. For example, one has been told by Dr. Boylan that the termination probably would have saved her life and the consultant obstetrician at the hospital refused the request for a termination because of the legal position in Ireland. One can consider the findings of the jury in the inquest in Galway, as well as the Galway west coroner’s report. The jury reached a unanimous verdict of medical misadventure and endorsed Dr. MacLoughlin’s nine recommendations. It was recommended that the Medical Council is to lay out exactly when a doctor can intervene in similar circumstances and for An Bord Altranais to have similar directives for midwives. Moreover, the importance of absolute clarity and legal protection for those involved was stressed, as well of course as other clear recommendations on procedures regarding blood samples, management of sepsis, communication, early warning, score charts and note-taking. In that regard Dr. MacLoughlin’s work must be highly commended.

One then comes to the work of the independent chairperson of the HSE report, Sir Sabaratnam Arulkumaran, which outlined the inadequate assessment and monitoring, the failure to offer all management options to a patient experiencing inevitable miscarriage and the non-adherence to clinical guidelines related to effective management of sepsis. The investigating team was satisfied that concerns about law, whether clear or not, affected the exercise of clinical professional judgment. I also read the aforementioned report’s recommendation 4b, which outlines an immediate and urgent requirement for a clear statement of the legal context in which clinical professional judgment can be exercised in the best medical welfare interests of patients to meaningfully assist the clinical professions to exercise that judgment. This raises the vital need for legal clarity, which would tie in with the fears of people such as Dr. Rhona Mahony that, in the exercise of her professional judgment, under the law as it stood she could be found to be breaking that law.

The other highly telling comment was from the chairman himself, who stated that had Mrs. Halappanavar been his patient, he would have terminated her pregnancy sooner to save her life. I accept from the statistics that Ireland is a safe place for women and that women who are pregnant get excellent maternity help. However, the procrastination and the dithering over the years, as well as the kicking to touch, have contributed to the death of this lady with the result that her husband, parents, family and friends will now be without her presence for the rest of their lives. Consequently, procedural issues and legal issues must be addressed and I believe this aspect of the Bill brings the legal clarity that is needed. While I support that aspect of it, I have difficulties with the suicide aspect, to which I will turn shortly.

Abortion is a term that does not sit easily with many people. I am conscious of those who have been hurt and upset in a variety of ways and disturbed by the issue.

I am conscious of women who had to continue carrying a baby with fatal foetal abnormalities, knowing the baby would not survive outside the womb. I would like to see that amendment included, and I was in the Chamber to hear the exchange with the Taoiseach last week. When a woman learns her unborn child will not survive outside the womb, I believe a compassionate country will ensure she can have a termination in her own country if that is her choice. That is a clear wish of the majority of the people. It is also a clear legal view that this can be done, namely, that a set of factual circumstances, such as fatal foetal abnormality, could also legally justify a termination. These women, and their husbands and partners, should not have the additional difficulties of travelling outside this country if their choice is a termination in those very difficult and tragic circumstances.

When I spoke on Deputy Clare Daly’s Bill some months ago, I said I did not agree with abortion on demand and I did not agree with abortion being used as a form of contraception, which is the case in some countries, but I do live in the real world and I know that in the real world women and girls make that decision. As we speak, women and girls are making a journey to another jurisdiction for a termination, that is, those who can afford to do so. There is a socio-economic argument also in that some girls and women are precluded from making that choice due to their economic circumstances.

I will not vote against the Bill because of the aspects with which I agree, as I have outlined, but I will not support it as it stands due to the suicide aspect of termination being presented as a treatment for someone who has suicidal thoughts and tendencies. As a teacher, I did the ASIST suicide prevention training, and I am also involved in an organisation in the inner city that is very active in suicide prevention and in counselling those bereaved through suicide. My objections come from that and from what I have been reading on that aspect. The Bill is also saying that every suggestion of suicide must be taken seriously, but somebody presenting with suicidal thoughts needs immediate intervention and psychological assessment followed by whichever of the following interventions are appropriate to that person: counselling, psychotherapy, medication, nursing care or social care. There are a range of interventions and options to deal with suicidal thoughts and tendency but I have not seen any evidence that a termination should be included in those interventions.

There is a real difficulty that a woman, pregnant due to being raped, who is very distressed, extremely upset and disturbed by what has happened, and in many cases we know the role of alcohol and drugs in sexual assault, could be assessed as not being suicidal because she has a will to live, despite that trauma of rape or incest. She will not be able to have a termination in this country, and that is and will be a dilemma for the medical profession which will have to deny her a termination. That will be a termination at a very early stage of pregnancy or even at a stage where it is not known whether she is pregnant, and if she has the means she will travel for that termination, if that is her choice. Her choice may be to continue with the pregnancy. It seems there is one option only for someone presenting as suicidal, which is termination.

The fact that there is no gestational limit also presents difficulties for me. A delivery at 23, 24 or 25 weeks could mean serious developmental issues and if it is further in the pregnancy, what will happen to that baby? Those are serious issues that are not being addressed. As this section is worded it will put enormous strain on our allegedly already overstretched medical services and mental health services because there are other mental health issues for pregnant women, and we do not have adequate resources for them.

The criminalisation aspect is very unfair and needs to be eliminated or at least significantly reduced. I will vote on the amendments but if the Bill remains in its current form, I will be abstaining, which is not something I like doing. I do not believe I have done that in my four years as a Member of the House. I hope the Bill could be presented in sections to allow a vote on each of those sections.