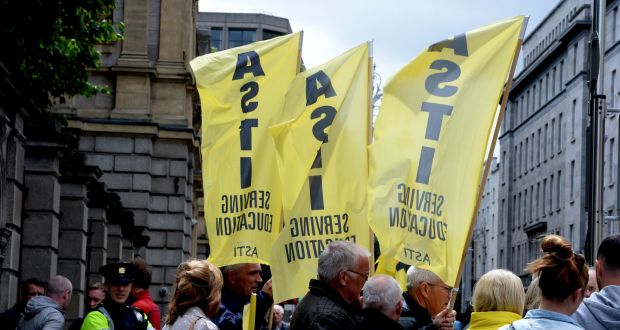 When the Second World War broke out, a state of emergency was declared because there were fears regarding our neutrality with various emergency powers going to the Government, including censorship, internment and economic powers. The powers lapsed in September 1946 although they were not actually rescinded until 1976, and in the intervening years the powers were not used.  The point is that there was an emergency and measures were taken during the emergency and then they were eliminated. Now, let us consider the FEMPI legislation, the acronym stands for “financial emergency measures in the public interest”. The key word here is “emergency”.

We can accept that there was an emergency. Without going through the history of the recession, the arrival of the IMF and the ECB and bondholders, and regardless of the reasons for the financial crisis, we accept that there was a crisis and that drastic measures were required. We know the extent of the disagreement and what those measures should have been. However, public servants were one of the targets and I believe they were an easy target. There is no doubt about the hardship and distress these measures caused to those public servants, in particular, those not on especially high salaries. Another target was former public servants. It is unfortunate that the media always concentrates on those former public servants with high pensions. They forget about the other public servants on adequate pensions. They were cut as well.

Public servants reacted well to the cuts they had to live with. They continued with their high standards of work, whether in teaching, nursing, the Garda or the Civil Service. We know the work that went on regardless of the extraordinary cuts they took.

That was the emergency and now we are told the emergency is over. That was the slogan of the Government party during the election. If the emergency is over, then why are the emergency measures not over as well? It is extremely unfair to those starting out in teaching, nursing, the Garda and other aspects of the public service to have such an unequal playing field when it comes to salaries. Those most affected are the recently and newly-qualified teachers and gardaí. The reopening of Templemore was positive, a step forward. However, this is a further step backward on pay inequality.

If we are not in an emergency, how do we justify continuing to punish the workers on whom we depend for vital services? It seems there is a recovery for part of the population but not for everyone. I think about those who qualified two, three or four years ago and those who endured pay cuts for years. We know that inequality is making it difficult to recruit people with the necessary qualities motivation and enthusiasm for these jobs. It is not simply a question of qualification. I am a former teacher and I am still involved in schools. I chair the board of management of a primary school. I know the type of person is a more important consideration than the qualification. The letters after a person’s name does not make him or her a good teacher or nurse. I realise we need accredited qualifications. When interviewing prospective employees we consider their qualifications and tick that box. However, after that we look at their other qualities and the other aspects to their personality to determine who will get the job.

We must encourage the best people coming out of third-level education to go into those jobs and professions which play such a major role in the lives of young people, in the lives of those who are ill or have disabilities and in our communities that want viable and effective community gardaí.

In my 36 years of teaching, I have never met anybody who went into it for the money. Back in the 1970s and 1980s, those going into teaching were at a considerable disadvantage because those with similar degrees coming out of third-level education and going into the private sector were certainly getting much better salaries than those who were teaching. It is like we are back in those days, except that the disparities are now within the profession between the recently qualified and those who qualified before FEMPI. The incentives offered by the last Government to public servants – teachers and gardaí – to retire early are part of the problem. Many fine and experienced people were lost in all of those professions.

We are told that we are the fastest growing economy in Europe, according to figures from the European Commission on how much we are expected to grow by and predictions of GDP. There are similar figures coming from the Economic and Social Research Institute, ESRI. There are signs of the recovery. After all, the slogan was “let’s keep the recovery going”. The recession is over. It is very difficult to expect teachers, nurses and gardaí to accept that inequality with no real end in sight. I was not here for the Minister’s speech but I listened to it and read it. I was struck by two of the headlines. He said that the economy is growing but that we are not out of danger. He spoke about the €2.2 billion saving and how we are still vulnerable to economic stress and shocks etc. The other point he made was about sensible spending and careful allocation. Why is the burden on particular public servants disproportionate to the burden on other sectors that could shoulder that burden much more easily? The most affected are those on low wages. There is inequality in wages for front-line workers.

The Minister said that by the end of 2016 there will be an additional 18,000 public servants to teach and to nurse. Where is the incentive for our brightest graduates to stay here when they are being offered not just better payscales abroad, but also better conditions and prospects of advancement and promotion in other countries? We have excellent training here in our universities, at third level and in the training colleges. However, so much of it in recent years has been for the benefit of other countries. We need to look at what the Minister is addressing here much more quickly. Again, I ask the Minister about the impact analysis and the equality-proofing of financial measures that are taken. There are civil servants and public sector employees who are in receipt of family income supplement. I believe that says a lot.

The Minister talked about increases of 2.5% on salaries below €24,000. That is not going to make much of a difference. There are alternatives. I will not go back over them. The Minister knows them. Corporate tax is just one such alternative. We are told the rate is 12.5%. Social Justice Ireland has done interesting studies on Ireland having an effective corporate tax rate of 6.5%. We must think of what could be done with that for the people who most need it.