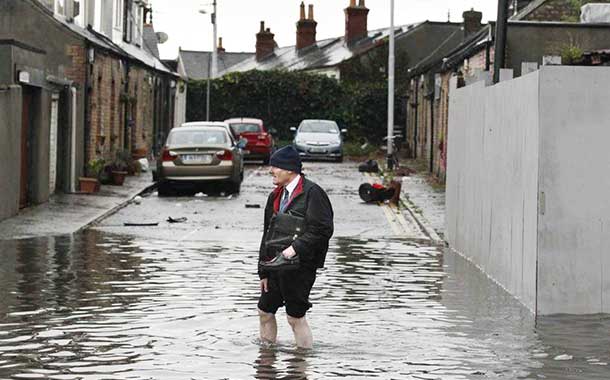 The Government’s lack of action regarding flood insurance

I wanted to speak last night because, although Dublin Central was not flooded this time, parts of it have been flooded previously, including the area of East Wall where I live. While we did not experience the nightmare experienced by communities in other parts of the country, we know all about flooding, for example, the suddenness with which it happens, which means that people do not have the opportunity to move cars or furniture etc. We know about the power of water, its destructive power, the dirt and the smell that lingers for a long time afterwards. We also know about the community and the way in which communities rally and support those in need. Those flooded in recent weeks have experienced all of this. The one word that summarises it all is “nightmare”. Seeing the affected areas on television was horrific. Dublin Central was not flooded this time and a fair number of preventative measures have been put in place. However we all have a major issue when it comes to flood insurance. Two of my previous Parliamentary Questions on the matter are referenced below the video.

QUESTION NO: 145
DÁIL QUESTION addressed to the Minister for Finance (Deputy Michael Noonan)
by Deputy Maureen O’Sullivan
for WRITTEN ANSWER on 27/05/2014

To ask the Minister for Finance if he will provide an update on the Governments potential levy charge on Insurance companies and its potential contribution to a distress fund for homeowners without flood cover; the amount of funds that will go towards the Office of Public Works flood relief schemes to increase insurability of homes in certain areas; the amount that will go towards homeowners who cannot afford to purchase insurance schemes due to persistent high costs; and if he will make a statement on the matter.
– Maureen O’Sullivan TD

The Government has not made a decision to introduce a flood levy on insurance premiums nor has there been any decision about how the proceeds of such a levy would be distributed. Government policy in relation to flooding aims to address the underlying problem through appropriate remedial works where this is economically feasible. The Office of Public Works is committed to alleviating the impact of flooding through the provision of defences, as well as a comprehensive assessment of flood risk throughout the country, and development of flood risk management plans for the areas most at risk under the National Catchment Flood Risk Assessment & Management (CFRAM) Programme.

This commitment is underpinned by a very significant capital works investment programme which will see up to €225 million being spent on flood relief measures over a five year period from 2012 to 2016. Works are completed on a prioritised basis. Because of the cost and scale of these types of flood defence works, this approach will see benefits over the medium and long term.

In additon, the OPW and Insurance Ireland have agreed on a sustainable system of information sharing in relation to completed flood alleviation schemes so that the insurance industry will have a much greater level of information and understanding of the extent of the protection provided by completed OPW flood defence works and, as such, will be able to reflect this in assessing the provision of flood insurance to householders in areas where works have been completed.

My Department is also undertaking a review of measures to address the availability of flood insurance cover, including the experience and proposals in other countries. In assessing these, care has to be taken that the proposed solutions do not put in place arrangements which, over time, would weaken the provision of insurance cover by the market with possible negative long-term consequences for the economy.

The Insurance Compensation Fund (ICF) levy of 2% is applied to home, motor and commercial insurance under the Insurance Act 1964 and came into effect from 1 January 2012.

QUESTION NO: 27
DÁIL QUESTION addressed to the Minister of State at the Department of Public Expenditure and Reform, Mr. Brian Hayes, TD
by Deputy Maureen O’Sullivan
for ORAL ANSWER on Thursday, 10th April, 2014.

To ask the Minister for Public Expenditure and Reform if at the Office of Public Works Flood Risk Management Conference being held next week, he will relay the points made by public attendees and community stakeholders, to flood insurance companies in any future negotiations between the Government and those companies in order that the full impact flooding has had on communities will be communicated directly to them; and if he will make a statement on the matter.

REPLY.
Insurance Ireland, the representative organisation for the insurance industry, will be in attendance at the OPW Flood Risk Management Conference in Dublin Castle on 10th April 2010. A speaker from Insurance Ireland will be giving a presentation at the conference. There will be a Question and Answer period after each session of the conference and this time will afford delegates the opportunity to make a point or to ask a question regarding insurance or any other relevant flood-related topic directly to the Insurance Ireland representatives and other speakers.

The aims of the Conference are to allow the public and interested stakeholders the opportunity to participate in a public policy debate on flood risk management in Ireland; to examine the background to and impacts of the recent severe weather and flooding; to set out the role of OPW and other organisations in the management of flood risk; to outline work undertaken to date and future plans; and to discuss national priorities and public funding in relation to this issue.

I understand that there are several community and action groups, representing areas that have been affected by flooding, already registered to attend the conference and I look forward to a constructive and productive debate on all flood risk management issues.

I feel that this is an important step forward for people in areas where flood defences have been provided by OPW, as OPW and Insurance Ireland are now working together to ensure that the flood defence works undertaken in recent years are being taken into account by the insurance industry. There has been a substantial investment of €320 million by the State in all parts of the country on flood relief works since 1995, with over 10,500 properties protected and benefits estimated at more than €1 billion in damage and losses avoided. It is important that the benefits of that investment are felt by all members of those communities.

The OPW has to date provided information on 12 completed flood relief schemes in an agreed format to Insurance Ireland and I now expect to see that, in these protected areas, the insurance industry recognises this significant capital investment on behalf of the taxpayer, and insures properties benefiting from that investment. My Office will continue to work with Insurance Ireland on the ongoing exchange of information on these schemes as they are completed and I am confident that this will lead to a greater availability of insurance to those who currently find it difficult to get.