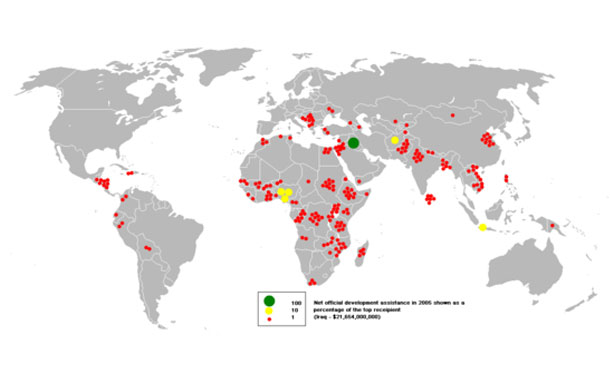 Working for the Foreign Affairs Committee I can say Ireland’s development aid programme does invaluable work because it makes a difference, it is poverty focused, it is about community empowerment, it is directed at the most marginalised and it has been untied. However, for development aid to have a sell-by date, the developing world needs to have the capacity to lift itself out of poverty. My point today when questioning the Tánaiste and Minister for Foreign Affairs and Trade was surely the strategy for development aid should be to get to a point where it is no longer needed. I asked about his commitment to human rights agreements and standards and environmental standards when we are negotiating trade treaties, because the incoherence we are seeing is in giving the aid but also not taking the steps required to end the need for aid. Particularly, if we are not supporting them in their capacity to collect taxes from the multinational companies that are making a fortune in those countries.

Deputy Maureen O’Sullivan:
With the new White Paper coming, how committed are we to policy coherence, particularly when we are seeing examples of policy incoherence? I will give one example on tax. At a previous Leaders’ Questions, I outlined a number of steps where each positive step we took on tax transparency was accompanied by a “but” – a backward step. The policy incoherence is giving the aid but then not following through on the tax justice of the developing world.
At a recent event in Dublin, the Rwandan ambassador made the point that $63 billion in illicit flows leaves the developing world. That is more than foreign direct investment and aid going into those developing countries. Real policy coherence would mean Ireland taking meaningful steps on tax justice. The Tánaiste may say that we got rid of the single malt, which is positive but it does not go far enough. What was needed was to take the steps the BEPS process has designed to really tackle the underlying problem and prevent replacement structures emerging.
The policy incoherence is also seen in trade treaties in the imbalance between what the developed country gains and the very minor gains for the developing world. For example, the Ireland-Ghana tax treaty prevents Ghana taxing the capital gains of mines, factories and large businesses owned by Irish companies. No spillover analysis was done prior to the treaty, which allowed for that and other examples of unfairness.
It is shameful that because of our aid reputation, countries in the global south want to trade with Ireland because they trust us. I know our ambassadors and other embassy staff are working on these trade relations. Are they on that page of policy coherence? I know there is a role for the private sector, but the danger is that it is moving away from this coherence. How committed are we to including binding human rights agreements, rights standards and environmental standards when we are negotiating these treaties? Where are we in implementing our business and human rights policy?
When we discussed the EU-Colombia trade agreement we were assured about these human rights agreements and yet since then we have had land grabs, forcible displacement, exploitation and intimidation of workers. We have had the scandal of the Cerrejón mine, the role of the ESB and the fact that CMC, the Coal Marketing Company, is registered in Dublin.
If we were committed to policy coherence we would be implementing our business and human rights policy. Where will the White Paper stand on policy coherence?

The Tánaiste: The Deputy has asked many good questions. The White Paper is more or less complete. I am reading drafts of it this week with a view to finalising a new Irish Aid development strategy which will contain much new thinking as well as build on many of the good things the Irish Aid programme has been doing for decades.
We are also planning for a very significant monetary increase to support our overseas development programme. The latest budget provided an increase of €110 million on the previous budget allocation across broader overseas development aid.
As the Deputy would expect, the new White Paper will prioritise areas such as gender equality, reducing humanitarian need, climate action, climate resilience and strengthening governance in different parts of the world. There will be new areas and a new focus on increased funding for areas such as education for girls, new initiatives on sexual and reproductive health and rights. We will have new funding streams relating to women’s economic empowerment. There will be a focus on building a new institute for peace support and leadership training here in Ireland. There will be a bigger emphasis on island states and climate resilience linked to that, given that Ireland is also an island state.
There has been a long and detailed consultation process in finalising a new strategy which will have increased funding over the next decade. It will have new areas responding to the obvious challenges that get debated in this House regularly. I look forward to the Deputy’s commentary on that. Of course, we need to try to ensure that domestic policy in Ireland is consistent with what we are trying to do elsewhere, whether that is from a climate perspective, a gender perspective, a reproductive rights perspective or indeed whether it is transparency in taxation to ensure that large multinationals pay their fair share of tax. The Minister for Finance, Deputy Donohoe, and the Taoiseach have been very clear on that. There is an ongoing international debate on how tax reform should take place and Ireland is very much part of that.

Deputy Maureen O’Sullivan: I acknowledge the consultation process that took place. Surely the strategy for development aid should be to get to a point where it is no longer needed. For aid to have a sell-by date, the developing world needs to have the capacity to lift itself out of poverty. That means that as well as giving the aid we are also supporting them in their capacity to collect taxes from the multinational companies that are making a fortune in those countries. It also means being fair to them when it comes to the tax and trade treaties to which we are party. To me that is real policy coherence. We could end our opt-out from Article 12 of the OECD multilateral instrument, which is a measure against tax avoidance. We could insist that our tax treaty partners would sign up to Article 4. We could insist on binding human rights and environmental safeguards.
Policy coherence is not a dreamy romantic ideal. It can be realised and it is a stated aim of the Lisbon treaty. The incoherence is in giving the aid but not taking the steps that could end the need for aid. We will wait and see what is contained in the White Paper. However, it is more than just having the words; it is about the action also.

The Tánaiste: I think the aid programme is all about action. I know the Deputy knows a considerable amount about the Irish Aid programme because she takes an interest in it. Anybody who takes the time to visit some of our programmes, particularly in Africa, but also now increasingly in the Middle East, will know it is all about action and getting to the people who need it most. That is why we can more than justify a significant step-by-step increase over time in the amount of funding we provide for that development aid programme between now and the end of the decade.
I share the Deputy’s hope that aid would not be needed in the future, but at this stage it is a dream and a long way away from a reality. People can correct me on this, but my understanding is that about 134 million people are currently reliant on international aid. We have millions of people in refugee camps and millions of people on the move. They are economic migrants and migrants fleeing conflict. I suspect there will be an increasing focus on those incredibly vulnerable people.