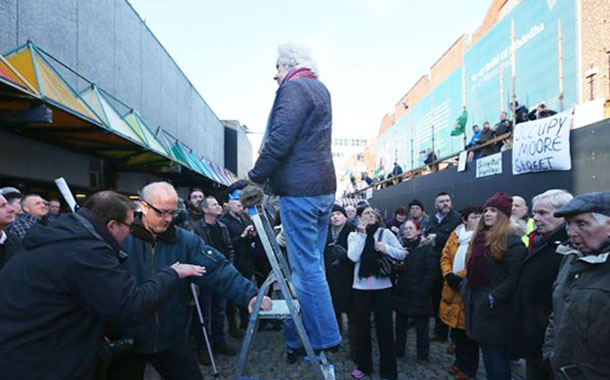 I was at Moore Street rally and march in Saturday; the derelict site looks as though it will probably remain for another 100 years and I do not accept that there is a range of views.  I think there are two opposing views: one favours the preservation of the site as an historic and cultural quarter and the other view favours major development of what is a historic battlefield site. Here is the exchange I had with Minister Humphreys on Friday last…

Deputy Maureen O’Sullivan: Could I ask the Minister to outline her plans for the recently announced Moore Street task force? I am inquiring about the composition of the task force, the chairperson, the terms of reference and whether the task force will have the power to make decisions that can be implemented.

Deputy Heather Humphreys: I fully understand that Moore Street is a location of great importance for many people and for many different reasons. There is a range of views about what is the best way forward for the street and what can be done to retain its historic character and to reflect the part it played in the events of Easter 1916. In a bid to bring together those views and seek positive progress on the future of the street, I have announced that I am establishing a consultative group on Moore Street with an independent chairman. My intention is that the group would not be given fixed terms of reference but would have the freedom to examine and discuss the range of relevant issues within the framework of this broad objective. The independent chair of the group will be Mr. Gerry Kearney, former Secretary General of the Department of Community, Rural and Gaeltacht Affairs. It is intended that the group will include cross-party Oireachtas membership as well as representatives of relevant stakeholders, including Dublin City Council, the 1916 relatives and the street traders. The group will be given administrative support by my Department. I look forward to its formation as soon as possible so that work can begin on charting a way forward. I acknowledge the work of Deputy Ó Cuív in this matter.

Deputy Maureen O’Sullivan will also be aware that the works approved by the High Court to safeguard Nos. 14 to 17 Moore Street started yesterday. The works are urgent and essential and are solely intended to preserve and protect the buildings until such time as a more permanent solution is identified.

Deputy Maureen O’Sullivan: The date we celebrated the Rising and the actual date of the Rising have both passed, and the derelict site looks as though it will probably remain for another 100 years. I do not know how the Minister can set up a task force while she is appealing a High Court decision. In the meantime, there has been a transfer of loans from Mr. O’Reilly of Chartered Land to a foreign-owned company, Hammerson. Has the Minister had any discussions about this with Dublin City Council, especially given the request to extend the planning permission for Chartered Land far beyond the expiry date? The Minister has already part-purchased No. 18 Moore Street, but I have not been able to get many details on it. A number of issues arise that have not been answered. How can someone be described as an independent chairperson if he is from the Department, and how soon is “as soon as possible”?

Deputy Heather Humphreys: The High Court decision has much wider implications than Moore Street. I took advice from a number of Departments and brought a memo to Cabinet, where it was decided that it was necessary to appeal the decision.

To clarify, I will ask Dublin City Council to nominate a representative councillor to sit on the stakeholders’ group. I also intend to have representatives of the 1916 relatives and the traders and cross-party representation from the Oireachtas. Mr. Gerry Kearney is a former Secretary General of the Department of Community, Rural and Gaeltacht Affairs and he left the Department many years ago. The Department was a very different one at the time with a different set of responsibilities compared to what it has now. I also hope that the Dáil—–

Acting Chairman (Deputy John Lahart): I will stop the Minister there. She is well over the time.

Deputy Maureen O’Sullivan: I do not accept that there is a range of views. I think there are two opposing views: one favours major development of what is a battlefield and historic site and the other view favours the preservation of the site as an historic and cultural quarter. It looks as if the task force will kick the issue to touch for another while. The task force needs a set timeframe within which a decision will be made on the best way forward. From my perspective, that means the decision will be based on what is for the good of the city. It should not be about what is good for a developer. We have had enough of that. The good of the city is to preserve an area of great historic significance to which so many ordinary Dublin people and Irish people are very committed.

The High Court judgment was very much welcomed by so many who have concerns about our heritage and who want to preserve those sites and not leave them at the mercy of whatever developer comes along. I accept that in the meantime we must protect what is there, but I urge the Minister to outline when the task force will finish its job and what power it will have to make recommendations that can be worked on. Would it not be wonderful if the close of the centenary year brought a satisfactory conclusion for the battlefield site?

Deputy Heather Humphreys: The committee will be formed and a meeting will be held within the coming weeks. A chairman has been appointed and we will work with the Dáil reform committee to assist in the selection of Dáil Members to sit on the forum. I anticipate that Members who have an interest in the issue will put themselves forward to the consultative group. This is a genuine attempt to get all the views and for people to sit around the table and find a solution to go forward. I wish to bring people together. I accept it is a very emotive issue but I want people to work together to find a solution.