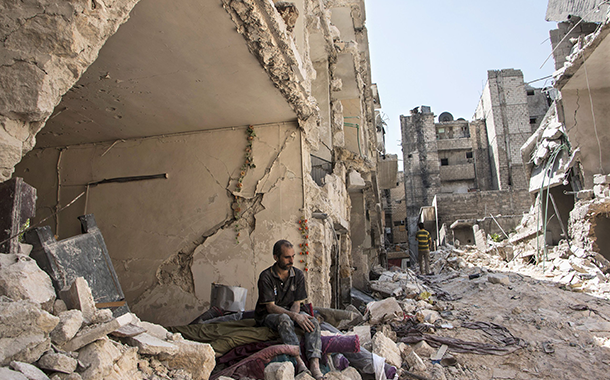 I move:
“That Dáil Éireann:

condemns:— the continued imposition of economic sanctions against Syria by the European Union and the United States of America; and

— the kidnapping of 54 children from the towns of al-Fu’ah and Kafraya in Syria, who went missing following an attack on 15th April, 2017, on a convoy of buses transporting evacuees from those towns; and calls on the Tánaiste and Minister for Foreign Affairs and Trade to:— advocate at the EU Foreign Affairs Council for the lifting of the EU’s economic sanctions against Syria;

— immediately make contact with the US Ambassador to Ireland, to raise the issue of lifting the US economic sanctions against Syria; and

— work with all relevant authorities for the return of the 54 missing children from al-Fu’ah and Kafraya.

Maureen O’Sullivan –
It is hard to believe that the Syrian conflict continues. It is also very hard to believe that this horrible conflict grew out of a very peaceful, pro-democratic demonstration. Syria, which has had a very troubled history since the end of Ottoman rule in 1918, has now come to this. Today, we see the effect of the conflict. I refer to the devastation and staggering loss of life. Cities, infrastructure and livelihoods have been devastated and there has been an impact on education, health services and culture. I visited Damascus before the conflict. It was an amazing city both culturally and historically. It was a vibrant city and it was inclusive. There was great respect for diversity in what was the Syrian capital at that stage.
We see the effects of war on everybody. I wish to refer specifically to the children, as mentioned in the motion. I must also mention those with a disability because they suffer even more horrifically in these disasters and because of sanctions. Let me refer also to those who, for various reasons, decided to stay in Syria. I had the opportunity to meet refugees at the Turkey-Syria border. Their desire was to go back home. They were holding on to their culture, way of life, food and education because they desired to go back. I see from a recent article that, as a result of bureaucracy, some Syrians are finding it very difficult to return to their country.
The motion is very straightforward and to the point regarding the conflict. It refers to what is essentially a humanitarian disaster. Sanctions have been proven time and again to have a disproportionate effect on women, children and vulnerable groups, such as those with disabilities. What does it say about the people who impose and agree with sanctions if they know it is the most vulnerable who will be most affected? For too long the United Nations and the International Court of Justice have accepted the imposition of sanctions under international law. In my opinion, however, sanctions comprise a type of warfare that is criminal because they lead only to tremendous suffering in a country already devastated by war. Of course, the sanctions are affecting those people who had little or nothing to do with the political decisions that caused the conflict in the first instance. Sanctions should be illegal under international law. Not only do they defy the UN charter in so many ways, they also circumvent the most basic principle of international law, which is sovereignty.
The United States has a long track record of using sanctions to further its political goals and enact regime change in countries that do not suit it. That has been the case for Cuba for over 50 years. The sanctions there continue today and are still having an effect. We have seen the effects in Venezuela, Iraq and Iran. If one thing is clear from all of these cases, it is that the vulnerable suffer most severely.
A number of international relations academics used the sanctions imposed in Iraq after the Gulf War as a case study. It was clear from the study that it was through the imposition of sanctions that the overwhelming damage was done. I acknowledge the Minister has no involvement in US foreign policy but I urge him to make the case that we do not support the sanctions in question. They are immoral.
I, too, have reservations about the leadership of President Assad but believe that when we put our personal opinions aside and examine international law, we will realise, as we learned at a foreign affairs committee meeting some time ago, that the Russian intervention was in accordance with international law. Russia was invited into Syria by that country’s Government. That is the reality, regardless of whether we like that Government. All the other interventions, however, are violations of international law.
One should think about the kidnapping of the 54 children. It was an absolute nightmare. It reminds me of the kidnapping by Boko Haram of the children in northern Nigeria. We know what happened to them. We know what is happening to Rohingya children and young girls today. They are being forced into prostitution. We also feel for those children in Yemen who are malnourished and suffering from cholera. It is a real indictment of international law that all of the relevant laws seem to be ineffective and totally disrespected.
Sanctions are another example of outsiders meddling and interfering, thereby worsening matters. All those interfering may claim to be altruistic but they are motivated out of self-interest. Libya is an absolute disaster. I know Irish people who have been living in Libya for over 40 years. Irrespective of whether one agreed with the regime of Colonel Gaddafi, one should recall that they had access to health care and education. The invasion came about with no vision or plan whatsoever and now the EU is funding Libya. There are grave concerns over this but sanctions are being imposed on Syria. Sanctions do not weaken regimes. In fact, they strengthen them. Cuba is a great example. Sanctions have certainly not weakened the will of the Cuban people. Owing to the sanctions, the Cuban people are totally committed and remain loyal to the principles of the revolution.
I hope that if we get a place on the UN Security Council, we will have a voice. There has to be a time when the veto is not exercised. This would have been a case. I refer to this humanitarian case.