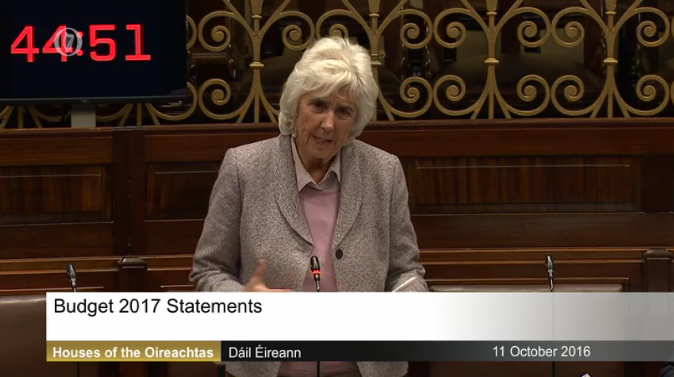 In recent years, we have been subjected to horrendous budgets. It is all very well talking about debt and the country being in a bad place, the IMF, etc. The measures taken were hard hitting, but they were disproportionate. Those with the least suffered the most and those, who were more able to take the cuts, were not affected proportionately.

Recent events in Dublin Central and the north inner city have certainly shown the cumulative effect of those cuts. We know the effect of 30% cuts on our community, youth services and other projects. It contributed to further social exclusion, deprivation and hardship.

I listened to the Ministers’ speeches and they outlined very fine principles – to build a fair and just society, that the benefits of our economic recovery would be felt by all and that it would make life better for all, but especially for the most vulnerable in our society. Nobody could disagree with those aims. However, will the measures announced today achieve those aims? We need a mechanism for constant monitoring and evaluation of the measures to see if they are making a difference and if not there should be a change and a readjustment.

Equality Proofing
This brings me to a general point. We know that budgets are rooted in economics and politics. However, ordinary people can get lost in the statistics and figures – the GDPs and the GNIs. There is always a need for equality proofing and the social impact analysis in that economic debate to ensure that budget measures make a difference to those who are most in need.

We know that budgets are political. Whether one is in government or in opposition, there will always be an eye on the next election.

This budget does appear to be more of a collaborative effort. It had to be. Perhaps we will see an extension of that collaborative approach, working through a consensus and compromise, which we can develop further with the new independent budget committee. We could get to a point where the committees will have a more progressive and active role in determining budgets and allocations.

As well as the budgets being in the political and economic arenas, we also need to have a philosophical input. That has to do with quality of life and how budgets contribute, not take from, the quality of life of citizens. Surely the common good, and improving the quality of life for everyone, has to be central. Mr.Ban Ki-moon has said, “There is one word above all that must guide us on this road map to ending poverty, transforming lives and protecting the planet. That word is dignity.” I look at today’s budget and ask how much is it contributing to the dignity of all citizens, especially those who are living in poverty, living with a disability or a mental health issue, those in homeless accommodation or who are sleeping on the streets, Travellers, our new communities, those coping with an addiction or in recovery from addiction and trying to stay in recovery? How will the budget add to the dignity of our prisoners and those coming out of prison? Next Monday is the UN day for the eradication of poverty. How much will this budget contribute to eradicating poverty? Again, constant monitoring is vital.

There are positives in this. I hear the “Late Late Show” cliché being used about this budget, but there is a danger that if resources are spread too thinly there will be negligible impact.

Housing
The year before last the budget announced a package of €2.2 billion for this area. Last year it was €500 million. What happened in the meantime? The situation did not improve and we know the increasing numbers, especially in Dublin, of people who are homeless, who are in negative equity and people who are being evicted. There are positive gains but sometimes it has been one step forward and three back. We hear the frustrations of people every day – lone parents and families on housing lists who are being told they are placed at 400 or 900 or so on that list. This time next year, will I be standing here and saying that today’s budget did make a difference? I see the student accommodation developments in Dublin, which we know is needed. The idea is that it will reduce the numbers in private rented accommodation, which is positive. I do not, however, see the same urgency in building social housing as I see in the building of student accommodation. The great aim of the help to buy scheme is to assist first-time buyers in putting together a deposit for a mortgage but there is a strong likelihood that this scheme, far from being progressive, will result in house prices increasing. The property market has the element of the sacred cow about it; there can be no controls. Will the tax relief in respect of the home renovation incentive scheme be applied to tenants in local authority housing who have the space on which to build? It would help to alleviate overcrowding because there are tenants who are willing to co-operate with their local authority and contribute with finance. Excessive and exorbitant rent is hindering the first-time buyer. If rent was reasonable and if there were controls in rent then those people would be in a better position to build up a deposit. Will the draft amendments to section 110 of the Taxes Consolidation Act 1997 relating to companies and other special purpose vehicle-type arrangement clip the activities of the vulture funds?

Social Welfare for elderly and those with a disability
The €5 increase in social welfare payments is positive, but we have to be sure we are not giving €5 with one hand and taking it back with the other in the form of further stealth taxes and increases in the cost of living. In Dublin I know the particular hardship of the prescription charges, especially for elderly people. I welcome the reduction for the over 70s, but it needs to be extended to people with disabilities. What is the budget contributing in making a positive difference to those people living with a disability? They have additional costs of living because of their disability, but this is not being recognised. Prescription pricing charges have increased by 500% since it was introduced in 2010. Advocacy groups point out that a single person, under 70 years of age, with a disability will only get a medical card if earnings are less than €184 per week, whereas a single person who is over 70 can have a means of up to €500 per week and be eligible for a medical card. I believe everybody over the age of 70 years should have a medical card but surely it is time for those who have disability to be given a medical card. It has been a disappointing budget for those with a disability. The Disability Federation of Ireland has stated it is disappointed that while there was a real opportunity for a focused impact with funding for people with disability, it was not taken.

Smokers
With regard to the cigarettes increase of 37 cent, it is unfortunate that the views of the group Retailers Against Smuggling were not considered. The group has pointed out that the illicit trade in tobacco is €1.2 billion in the past five years. In the first six months of 2016 the tobacco products seized by Revenue led to a loss of over €15.8 million to the Exchequer, an increase on the figure for the previous period. There is a growing black market, it is on the increase and an increase in the price of cigarettes will further grow that black market. The Retailers Against Smuggling had asked for a moratorium on further increases until there was more research done on the subject. A packet of cigarettes is now €11. On the black market a packet would be €4 or maybe €5. We have anti-smuggling rules, but they need to be strengthened. This price increase is not going to put off smokers but it is going to have more of them turning to the black market.

Foreign Aid
I am glad to see the reference to overseas development assistance. It is quite a distance from our commitment to 0.7% of GDP. While there has been an increase, we are going down the percentage line and we have no indication of how we are going to move towards that 0.7% target. Ireland played a very strong role in sustainable development goals. The President and the Taoiseach were in New York representing Ireland at the UN summit, which adopted the goals, but we do not appear to have an Irish sustainable development strategy and a concrete implementation plan that would contribute towards co-ordinating the achievement. We know of poverty and exclusion in this state, but in the developing world we know how much worse it is. Philip Alston, UN special rapporteur, made an interesting point when he said there would be “little to be gained by providing assistance unless the structures of the society can be encouraged to develop in directions that can make [more] effective use of that aid.” One of those structures is tax. The Minister, Deputy Michael Noonan, said the 12.5% corporation tax rate would not be changed. What is our effective tax rate? With regard to our obligations internationally on tax justice, is our tax policy undermining the tax take of those less well-off countries? I welcome the closing of the double Irish loophole and the country by country reporting, but we have to ensure we do not facilitate multinational tax avoidance and that our tax and fiscal policies are grounded in principles of human rights.

Animal Welfare
As someone interested in animal welfare issues, when I heard the provision of €25 million for a new animal welfare scheme, I was delighted. I was waiting to hear that the funding was going to the animal welfare groups, those organisations that work on animal welfare issues and with animals we know are being ill-treated, injured and abused, such as greyhounds, hares, foxes, badgers or puppies. However, what is the €25 million for? It is for sheep. No disrespect to sheep, but during my involvement with animal welfare, we had no issues brought to our attention with regard to the abuse of sheep so I wonder who is actually benefitting from the €25 million. The Irish Council Against Blood Sports has stated that since 2001, the Government has handed over nearly €250 million to the greyhound industry, including €14.8 million in 2016, yet we know the abuses in this industry.
Tá an-díomá maidir leis an laghdú sa mhaoiniú don teanga Gaeilge. Dé Máirt seo chugainn, beidh cúpla uair a chloig againn sa Dáil agus beimid ag caint faoin nGaeilge agus an féiniúlacht chultúrtha. We will make fine speeches on that occasion on how important the Irish language is. At a time when demand is on the increase for gaelscoileanna there is a decrease of 9% in Irish language funding.

Child Care
I welcome what the Minister for Children and Youth Affairs, Deputy Katherine Zappone, is trying to do in child care, that it is of quality, more affordable and progressive, but there are concerns from stay-at-home parents and those who provide child care at home. They feel very hard done by with this measure. I am sure the Minister will take these issues on board.

What Are The Positives?
There are positives in the budget for those who start their own businesses, the self-employed, farmers and fishermen. There is the Christmas bonus. There are going to be additional teachers, gardaí and nurses, but we have to have the conditions in schools, hospitals and nursing homes in order that people will want to work in them. The HSE budget is up by 5%. I note the staffing hours will be increased for the community and addiction projects. Budgets have the ability to hurt or help the weak, the ill and the frail. It is only in time that we will see how much this budget is contributing in a positive or negative way.