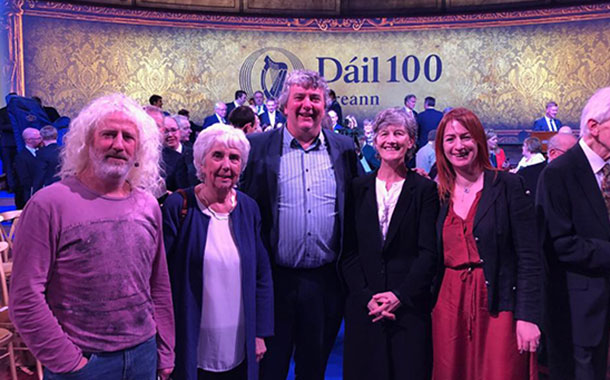 My speech at the commemoration of the First Dáil

The press in 1919 wrote of the tomfoolery of the Sinn Féin parliament in Dublin, the “stage play at the Mansion House”, a “futile and unreal” event which, if it were to be taken seriously, could be viewed as a momentous one. It was a momentous event: Ireland coming out of the shackles of 800 years of colonial domination, declaring independence, a Democratic Programme in accordance with principles of liberty, equality and justice for all; a first Dáil that went on to make progress in setting up working Departments, progress in local government, progress in finance by raising a national loan and in administering justice. The most significant outcome was the start of 100 years of uninterrupted democracy. Ireland did not experience the chaos, conflict and devastation suffered by so many countries, which still do today, when they too escaped from colonial domination. The Democratic Programme promised so much for children and the poor, the natural resources of soil and seas for the people, the right of every citizen to an adequate share of the produce of their labour that it appeared the social revolution was coming, along with the political one, especially when the programme averred that all right to private property must be subordinated to the public right and welfare.

What has happened? We know the housing and homelessness reality. How many did we pass on the street on our way here today who were begging or sleeping there? How many did Brother Kevin feed today at the Capuchin Day Centre? We know the inequalities and difficulties in our health system, and we have many examples of those who have been left behind in the intervening years, those with disabilities, physical and intellectual, the travelling community, migrants, refugees, those who have been waiting years for justice and we see the way we have been dealing with our environment and animals.

There are ironies too. Countess Markievicz was Minister for Labour but how many years was it before there was another woman Minister? How many years before all the inequalities relating to women were really addressed? Ioróin eile, we know about the Dáil proceedings and the commitment to Irish. De réir a chéile, ámh, bhí sé soiléir nach raibh an Rialtas ag an am sin dáiríre faoin nGaeilge. Cuir i gcéill a bhí i gceist i gcónaí i rith na mblianta agus tá an cur i gcéill fós ann anois. Another irony is the loss of history as a core subject on the junior certificate curriculum. Unless it is addressed, there will be young Irish people leaving school without having learned about the events we are commemorating.

This commemoration also reminds us of the importance of protecting our independence, sovereignty and neutrality. It is interesting to read how previous commemorations were used to control the historical narrative and as political tools. As we approach the commemorations of the War of Independence and the Civil War, difficult times, with Irish killing Irish, there is a need for reflection and conversation, and perhaps an opportunity for the arts to lead that reflection in the way the Abbey Theatre did at the beginning of the decade of centenaries with its Theatre of Memory and Theatre of War symposia.

Progress has been made since the first meeting of the First Dáil. Ireland has taken her place among the nations of the world and is respected. I am glad I am an Irishwoman, living in Ireland and not in any of many other countries. I am glad we have a President who does not want to build walls between communities and people but – there are buts – fadhbanna, deacrachtaí agus dúshláin, which mean that we need a new vision, one that moves away from complacency and conservatism, away from measuring everything in economic terms, from the rhetoric of idealism to realising the ideals and principles of social justice and fairness, as set out in the First Dáil that we are commemorating and making them the reality of life in Ireland, realising the sustainable development goals.

The Oireachtas has to lead the way. We have to challenge ourselves on the kind of Ireland we want. That means a different, better vision, more wisdom, a better awareness of those who struggle and a real concern for humanity, a true commemoration of the First Dáil. Comhghairdeas do gach éinne a bhí ag obair go dian dícheallach i dtreo is go mbeidh an comóradh seo againn inniu.