Latest
Home Human Rights Sovereignty is a most important foundation 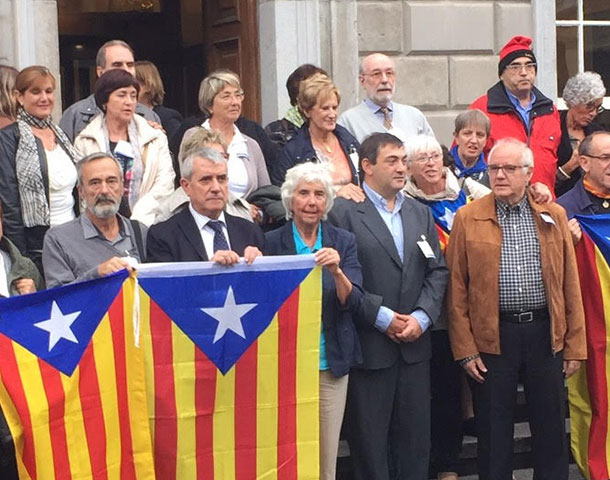 Sovereignty is a most important foundation

We are all horrified by the repression that took place when people tried to exercise the democratic right to vote. It is clear that there was a centrally orchestrated, military-style operation that had been planned carefully. There were armed, masked officers coming into polling stations trying to prevent a peaceful, democratic process…. We in Ireland have moved past our civil war politics but I think it is a different matter in Spain. There is no doubt that some commentators have seen elements of Francoism in this. Madrid appeared to be resisting democracy and it is certainly not helping those Catalan people who wanted to remain in the Spanish state. It is only through dialogue and people engaging and listening in an atmosphere of mutual respect that these issues can be resolved in a peaceful manner.

I admit if I were a non-Catalan Spaniard, I probably would not want to see a break-up of Spain because no doubt it would be followed by other regions such as the Basque region or Galicia. However, the question has to be asked as to why there is this desire for self-determination. Why has it arisen now particularly? It does come back to the central Government in Madrid not being willing to engage in that dialogue that we all think is so very important. Under international law, as others have stated, sovereignty is a most important foundation. Although this is a sovereign question for Spain, the situation has been worsened by what we can only describe as bully-boy tactics from Madrid fuelled, I believe, by the shortage of a democratic tradition in Spain’s history.

A couple of years ago, I was in Barcelona at the invitation of Diplocat, with a number of Deputies and Senators. Diplocat is a public private partnership and is all about fostering dialogue and building relations between the citizens of Catalonia and other countries. They were looking for the active involvement of Catalan society in exchanging views and ideas in areas like government, business, culture and education. It was all about promoting a fairer, more peaceful, democratic and sustainable world. We met a number of Catalan stakeholders including political parties, civil society and members of the Government of Catalonia. Those meetings were open and frank. We met people who were pro-independence and those who were against it. We met those who were in favour of a more federal type system of government that would respect the culture, identity and ethnicity of all of the regions. Since then, I have met a number of other Catalan leaders and communities. One thing that came across was that they were very proud of the relationship between Ireland and Catalonia.

The observers also noted the very peaceful nature of the Catalan people. The violence and repression really shows how we do not learn from history. We know from history that repression only fuels and hardens those who are being repressed. We saw it in our own history in 1916. Prior to the executions in 1916, everybody wanted Home Rule but after them it was a very different matter. It is very likely that those Catalans who did not want independence will be hardened in their attitude and will be joining the pro-independence movement. We could look at the example from Scotland. Although there are historic differences between the two countries, it is the same principle. What we saw in Scotland was dignified debate. The two sides – “Better Together” and “Yes Scotland” – could debate all of those issues. It goes back to the right to self-determination as a principle in international law. The EU only saw that as applying for states that are already recognised as independent.

The European Court of Justice has ruled that Article 1 of the charter guarantees the right of self-determination to states that are not yet independent. The history of Catalonia, dating back to Ferdinand and Isabella, is a difficult one but there is no doubt but that Catalonia has a separate culture, identity and language regardless of that legal standing internationally. I called on the Minister to use his position to advance political dialogue. He is a member of Fine Gael, who are member of the European People’s Party, EPP, of which the ruling party in Spain is also a member, he is in a unique position to advance that dialogue.