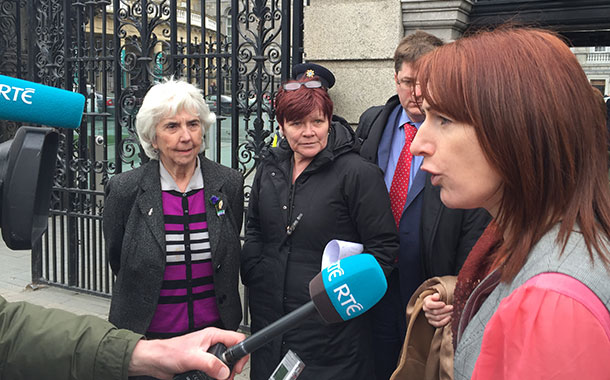 We welcomed Survivors of Symphysiotomy to Leinster House with an impressive line up of speakers who are advocates for human rights and legal experts.

In February, a notice posted on the website of the Symphysiotomy Payment Scheme advised applicants that all unclaimed documents submitted to the Scheme would be destroyed if applicants did not specifically request that they be preserved. Applicants had until the 20th of March to make such a request – a deadline which has now passed. It is of deep concern to us that the destruction of applicants’ documents may have already commenced.

The Data Protection Acts require that the Redress Scheme cease to hold the records when their purpose has expired. This is not the same as requiring destruction. Which leads back to the obligation under the Terms of Reference – the return of the records.

The HSE has given the SOS group a retention period of 7 years for hospital records of this kind. The HSE’s own published Data Retention schedule for Clinical Records defines the retention period for maternity related records as being 25 years after last pregnancy. Given this confusion, on what basis is the Department claiming that the records continue to exist in hospitals? If records management in the HSE is in that poor of a condition, then there is no guarantee that any copy records that might exist could be found if needed.

The original notification of intent to destroy at the end of February was not clearly communicated, and was not in line with the Terms of Reference.

The current options letter is confusing, and could simply have been replaced with the distribution of the records to their original submitter or their agent.

We understand that only approximately 200 letters have been returned to the Assessor by the closing date. This leaves the question of what action should be taken with the remaining records (over 500) were there is a “null” preference. A null response cannot be interpreted or inferred to mean a particular preference, therefore the Terms of Reference must be applied correctly and records returned. The Assessor and the Department must return the records to the individuals who submitted them (or their nominated legal representative).

Under the terms of reference, there is no mandate for the HSE to destroy these documents. These documents represent decisions which were condoned and accepted by the State and by its institutions which should be kept to hold the State to account and so citizens never forget the wrongs of the State against some of its most vulnerable.