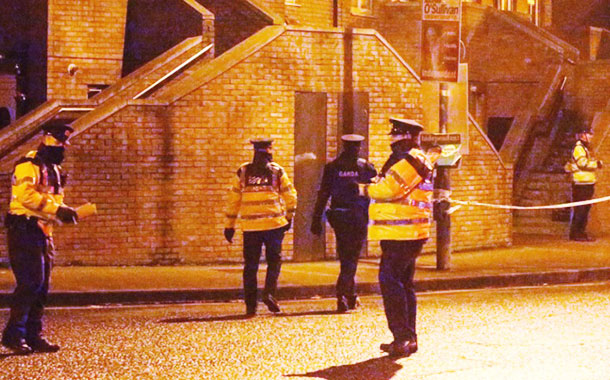 We see the large numbers of Garda at the protests around the country; in Dublin City during the protests it is obvious the street drug dealing jumps as the number of Gardaí are allocated elsewhere. We see it and get calls into the office about this all the time. This gangland war is not going to end unless the proper resources are funnelled into bringing the killers to justice. Local Garda cannot be expected to do two things at once but that is the case. In Cabra Garda Station the number of Gardaí drops wheneaer the president leaves his house. They are not given any extra manpower to deal with that.

We have a serious problem of reacting instead of putting in place measures to solve the occurrence in the first place, across the board. While Garda resources and check points at corners with high caliber machine guns will give the image of an out-going Government responding to the spate of gun crime; that’s in fact all it is doing, giving an image of a Government responding to the problem.

The Dublin gang culture is a product of many different regressive measures taken by Government. Firstly we see a lack of robust legislation to tackle certain types of street dealing which I have long called for and that is keeping the Gardai’s hands tied as they go about their jobs; the 38% cuts in services in areas of disadvantage, which I highlighted at Leaders Questions last year, and; we see a criminal justice system that is too reliant on locking people up at tax payers expense only for them to re-offend over and over again. A proper community court would help deter people from a life of crime, another measure I have constantly called for.

I have been campaigning since I entered the Dáil for a Mini-Criminal Assets Bureau, just like the CAB Tony Gregory campaigned for to deal with the drug dealers. Since then, CAB has moved onto all crimes where large scale money is involved, not just drug related and now we need to rethink how to deal with mid-level drug dealers who are not selling drugs and flashing the cash with little or no consequences. These are the people doing the work on the ground and many are not being investigated.

If we are serious about stopping these killings, proper resources and legislation are required to investigate and bring these criminals to justice and to deal with the Drugs Crisis once and for all. However, this will not happen unless we take a multi-facet approach and enable the Gardaí to do their job.

I had hoped to introduce the Proceeds of Crime (Amendment Bill) 2015 which was not accepted in the Dáil on standing orders. This bill called for the establishment of a locally organised mini-CABs to tackle mid-level drug dealers who are able to go about their business under the radar of the Criminal Assets Bureau in its current remit. The bill also called for the re-allocation of seized proceeds of crime from drugs to be invested back to the community organisations, the drug task forces and the prevention and education programmes that are dealing with the effects of drugs in the communities.

We must remember that “three times as many deaths occur from drugs as occur from road accidents”, it is clear resources definitely don’t reflect that, and drugs and addiction are far down the list of priorities with almost 38% cuts to those community and youth projects and addiction services in Dublin Central.

I believe that funding directed to agencies and groups tackling the scourge of drugs; in conjunction with increased Garda numbers which are effectively allocated and resourced, has to be sufficiently adequate, or these heinous killings in the community will continue and the drugs crisis will worsen.

How many more young people need to die, how long do communities need to live in fear before proper resources will be allocated to cut off the power the gangland figures have on the community. Short-term check points and heavily armed Garda may look good to the media but more substance and preventative measures are essential from the next Government as opposed to the reactionary tactics used in the last number of years.