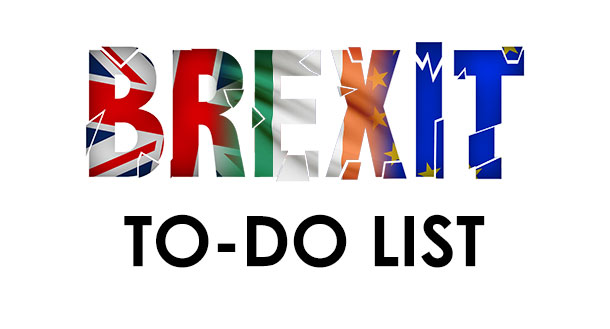 While we hear that there will be no return to a hard Border and there will be respect for freedom of movement and the common travel area, there are no guarantees. As a member of the foreign affairs committee and the Joint Committee on the Implementation of the Good Friday Agreement, the concerns and anxieties of Border communities and businesses are obvious. Particularly in the areas of agri-food, trade, education culture, sport, health care, transport and retail, not to mention the implications for North/South bodies. These are my initial thoughts and input into how the situation should be handled.

1. Ireland cannot get caught in the crossfire between the EU and the UK.

I heard the Prime Minister, Theresa May’s words recognising the unique relationship with the Republic and the importance of the peace process in Northern Ireland. However, the UK electorate took an utter gamble and there was a lack of thorough investigation and research into what Brexit would mean for the agreement. Whether one agrees with the Good Friday Agreement or not it has ensured peace, ease of movement and no hard Border. A generation of Irish, the people in Northern Ireland and the Border areas, have no memory of having to queue at Border crossings. While the Good Friday Agreement is recognised internationally it still raises concerns because if one leaves an organisation or club one cannot expect to enjoy the same benefits or advantages as when one was a member.

2. Now is the time to solve the unresovled issues from the Good Friday Agreement

There are unresovled issues from the Good Friday Agreement and there is a real danger they will continue to be left unresolved. I refer to issues relating to flags and parades, legacy issues such as the continuing wait for information on the Dublin-Monaghan bombings, and prisoner issues. These are very serious and continue to deteriorate. Licences are still being revoked, with Tony Taylor being the most recent case. He has been over a year in Maghaberry and he has a date in May for a parole commissioners’ hearing, which may happen but is more likely to be cancelled. The stock-take agreement and the work of the International Red Cross in the prison are being ignored and my fear is that, with Brexit, these human rights issues are going to move further down the scale of importance.

3. Create a specific strand to keep the peace

We need to look at the potential implications for reconciliation and the need for a specific strand to deal with the protection of the Good Friday Agreement. Theresa May spoke of the responsibility to ensure nothing was done to jeopardise the peace process but some issues are jeopardising the process and they are likely to be ignored or treated in a high-handed, authoritarian way because we know how fragile peace is. I was very struck by the evidence of a witness from the University of Ulster who was before the Joint Committee on the Implementation of the Good Friday Agreement recently. He had evidence from divided societies everywhere and the conclusion was that the implications of Brexit for identity and cultural issues may be more significant and potentially more dangerous in the long term than the specific economic consequences. His point was that uncertainty about identity and political issues can rapidly escalate into direct confrontation. I do not believe for one minute that there is any comparison between Northern Ireland and Gibraltar.

4. Tie up any tax loopholes

If international business and finance firms relocate to Ireland we have to look at them in terms of tax transparency because we need to reaffirm our commitment to country-by-country reporting and a public register of beneficial ownership. I am involved in official development assistance and am concerned about the implications for that of Britain leaving the EU. The UK has been a major contributor to the EU’s development budget and had a role in formulating development policy. Its eligible share of the general budget was €1.23 billion, out of €9 billion in ODA spending, and its share of the off-budget development fund from 2014 to 2020 was €4.48 billion, which will be a significant loss financially and from the point of view of policy. We need to look at the implications for developing countries of financial regulation and taxation practices because Brexit could bring about changes to tax and regulation which have to be examined. There is a real danger that the work of Irish Aid will be undermined.