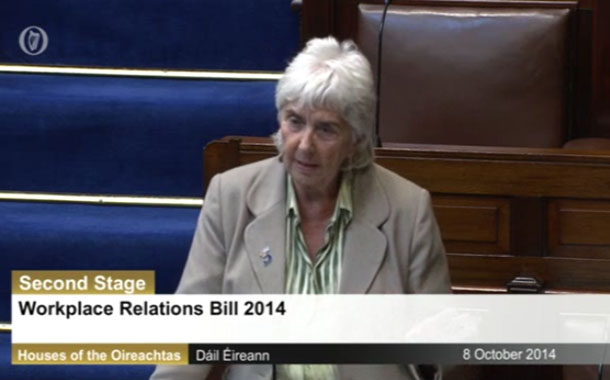 During the week I spoke on the Workplace Relations Bill. Given that there will be disputes and disagreements, there is a need for efficient and effective procedures to deal with disputes in a very timely way.  The procedures must be fair to both employers and employees and must not cost a fortune.

It is positive that five existing bodies will be merged into two – the new Workplace Relations Commission and the expanded Labour Court. Where there is an issue of concern in this country, we seem to have a penchant for having not only one organisation, but several, to deal with it. There are plenty of examples of that. The merger is positive. Having five bodies does not make for efficiency. It makes for confusion and lengthy delays and it also leads to resolutions not coming about in a timely fashion.

At a certain point, for whatever reason, some employees who have given dedicated and loyal service over many years to an institution have become sidelined in their jobs. In spite of that dedicated loyal service, their work has been diminished in such a way that they have been left with no option but to take redundancy. These are persons with families, with mortgages. Usually, the institution is losing all of that experience to employ others on a quarter or one third of the salary of that person. In one case of which I am aware, the current options were not availed of due to what would have been a lengthy and onerous process.  What is important in the employer-employee relationship, and where there is a dispute, a conflict or a disagreement, is that there is ease of access to a resolution process, that there is a fair hearing, a prompt resolution, access to appeal and a resolution of that appeal, and that the language used is accessible to all.