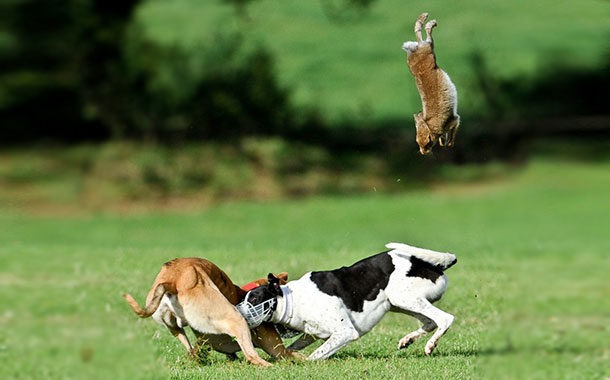 The time to ban cruel Hare Coursing is now, contact your local TDs

Hare coursing is barbaric and is quite clearly a legal form of animal cruelty. If this bill is not passed on Thursday, 50 years from now the TDs in the house will find it laughable that we spent the time to debate live hare coursing, and still voted to keep it. Gandhi once said that first they ignore you, then they laugh at you, then they fight you, and then you win. Animal welfare people have been ignored, we have been laughed at, we have been fought with but we will win. We may not win on Thursday but we will win at some future date.

In 1993, the late Tony Gregory introduced a Private Members’ Bill on wildlife to ban live hare coursing and I am doing the same today. After his death, I sat up there in the Visitors Gallery with families, friends and supporters and listened to quite a number of speeches about Tony, his political career, his integrity, his honesty, his commitment and his passion for justice. There were so many instances in which he was a voice for those who were voiceless. He was passionate about nature and a fervent animal lover, and he abhorred cruelty to animals. In his Bill, he spoke about the “welfare of the vulnerable and defenceless in nature’s creation”. It would be a fitting and lasting tribute to him were Members able to complete what he started in 1993.

It is known that the hare is a timid and delicate creature and it is cruel to treat an animal that is used to the freedom of nature in the way it is treated, with the snatching, the netting and the stressful transportation procedures. Then there is the so-called training of the hares for the better sport, where they are familiarised in the fields in order that when the coursing begins, they will run up the centre of the field. I have absolutely no doubt but that blooding of the greyhound is alive and well in rural Ireland because why would a greyhound run after a hare otherwise? Even though it is muzzled, the greyhounds can maul the hares, strike them and inflict agonising injuries with bones broken and bodies crushed as they are tossed into the air like rag dolls. Therefore, the muzzling does not prevent injuries and after years of such muzzling, the statistics are to hand in this regard. I already have mentioned the stress myopathy and I recently met a former ranger from the National Parks and Wildlife Service who was quite unequivocal in describing this as cruelty to animals.

As for some of the arguments that came up, one was that coursing is part of our traditions. It is neither traditional nor is it Irish. Coursing, as practised by the Irish Coursing Club, was introduced to Ireland by British Army officers at the Curragh in 1813. Another argument is that were live hare coursing to be banned, it would be driven underground and there would be illegal hare coursing. That really is stating that those who are into coursing are the sort of people who are prepared to break the law. As I am against live hare coursing, I am also asked whether I am opposed to horse racing. There is a big difference in that racehorses are not in a race in which they are being chased, mauled, tossed and terrorised by another animal ten times the size; there simply is no comparison. I am also asked, because I am a Dub, what do I know about rural Ireland. Yes, I am a Dub but I also am Irish and I love my country, both urban and rural. Moreover, with a name like O’Sullivan, I can assure Members of my rural connections. In my case, they are to counties Kerry and Meath and I have a long association with one of our islands, Oileán Chléire in west Cork.

Another argument is that this is an urban-rural divide but this absolutely is not the case because there are extensive objections in rural Ireland to this practice and regrettably and sadly, there are many examples of animal cruelty in urban centres and in Dublin. I simply find the entire practice to be deplorable and archaic. I will repeat Deputy Bríd Smith’s comments because I have also been reading about the Irish hare being special and being a subspecies of the mountain hare. It is possibly Ireland’s longest established native mammal, even present during the ice age, but at the rate we are going, it will not survive well into this century and will go the way of the corncrake and the curlew. There are considerable doubts about the report mentioned by the Minister, which has been sharply criticised in other quarters to the effect that its conclusions are not trustworthy. The Irish Wildlife Trust drew up a species action plan for the hare in which it stated the populations have undergone a substantial decline in the past 15 to 25 years. There also is the aspect that when hares are taken for coursing, the young hares, the leverets, are left to starve.

The Animal Health and Welfare Bill 2012 states: “A person shall not… do, or fail to do, anything or cause or permit anything to be done to an animal that causes injury (including disfigurement) or unnecessary suffering to, or endanger the health or welfare of, an animal.” Are Members suggesting this constitutes necessary suffering? According to the official reports, at 20% of coursing meetings, hares are injured, hares are put down and greyhounds are injured. This is not necessary suffering and I believe it to be against the entire tenor, thrust and ethos of the Act. It is a national embarrassment that we persist in this cruel practice. I understand the numbers at coursing meetings are falling and no reputable company or organisation will sponsor a coursing meeting.

I have been critical of the Minister for Arts, Heritage and the Gaeltacht on the licence issue and for allowing the hare trade, but I acknowledge her significant and laudable role in the numerous commemorative events to celebrate the 1916 Rising. Consequently, I wish to draw her attention to a letter brought to my attention that was written by Margaret Pearse, sister of Pádraig and Willie, in which she condemns hare coursing and states both her brothers would be “foremost in condemning coursing for the sadistic spectacle it is”. She wrote they “would have been totally opposed to the inhuman treatment meted out to… innocent little hares at … coursing”. I note Members are conscious that they seek to have fitting tributes to the memories of those who died in 1916.

I also have been struck by the number of male clergy who are frequent attenders at coursing meetings and wonder how they reconcile this with one of the churches most loved saints, namely, St. Francis of Assisi, who is the patron saint of ecologists, a title that honours his boundless love for animals and nature. While I do not wish this to become a sexist issue, I understand the attendance at coursing meetings is predominantly male. Regrettably, the majority of women elected to this House will vote to continue this cruel practice. Perhaps the women in the political parties who share my views and do not like this wanton cruelty to defenceless animals will stand up to their male counterparts. I also know, because they have told me, that there are men in the various political parties who are against the practice of live hare coursing and they would like to see it banned. However, they will be subject to the Whip. I have asked for a free vote on this matter, part of the new politics, and I continue to live in hope that this time next week, I might get that free vote. I stress that there is an alternative. I believe that the rag coursing in Australia starts in May. Not a single hare will be snatched from its natural home in the countryside to serve as bait. Not a single hare will be obliged to endure the terror of the chase in a wire-enclosed field or endure being mauled, struck or pinned to the ground, as happens here. However, the fun can continue with the rag coursing. Were one to google hare coursing, everything that comes up is negative and were one to google images of hare coursing, one will see scenes of terrible cruelty. I cannot believe Minister Humphreys can talk about concerns for the welfare of the hare while statistics, evidence and figures showing the exact opposite, where there is wanton cruelty, is available.