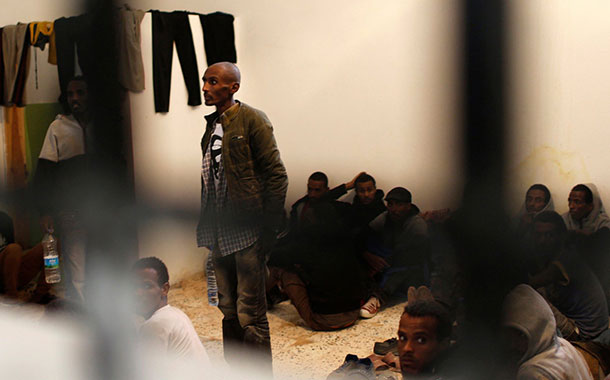 Deputy Maureen O’Sullivan: Libya is in turmoil and chaos. It has three ostensible Governments, none of which could be considered a functioning Government. The economy is sliding towards bankruptcy as the Central Bank of Libya eats into its reserves. Citizens are finding it difficult to make ends meet. There are shortages of electricity, fuel and medical care. Armed groups are roaming about. Many Libyan people are waiting to get to Europe. The EU is providing funding to Libya to deal with migrants in line with the Malta declaration policies. This ludicrous hypocrisy is harming the migrants involved.

I have seen reports and pictures depicting the so-called migrant centres. I have heard testimonies from some of those who have survived the search and rescue operations in the Mediterranean. As a result of the political situation in Libya and the lack of rule of law, people are being held arbitrarily. No one knows how the detention system is working. The inhumane conditions do not meet any national, regional or international standards. They are dangerously overcrowded. There is no light and no ventilation. The sanitation areas are unsuitable. There are health hazards. There is no running water in many of them. Where the availability of running water has been improved, unhindered 24-hour access to toilets is not widespread. There are cases of extreme violence and abuse from people in authority in these centres, as well as from smugglers and criminal gangs. Injuries like fractured bones, open wounds, cigarette burns and lash marks have been documented.

There have been many instances of malnutrition in the migrant centres. The global acute malnutrition rate was 5% in some of these centres. The rate of acute malnutrition was 10% in one particular centre. Non-governmental organisations would not see that extent of adult malnutrition in emergency nutritional crises in Africa. There are concerns about the calorie content of the food being given to people in these centres. People in some centres are being fed from communal bowls. One can imagine the scramble for food that results. This has a particular effect on the young, the disabled and the sick. People who have been rescued in the Mediterranean have spoken openly about the abuse and sexual violence that is occurring at these centres. Many of the illnesses that are appearing are preventable under normal circumstances. There have been instances of torture, forced labour and financial exploitation. I am setting out the facts of the situation.

Many of these people in the centres were “rescued” in the Mediterranean and brought to Sicily before being returned to Libya. I acknowledge the courage of our Navy personnel who are involved in search and rescue operations. However, we must note that many of those who are rescued from drowning are left in appalling and inhumane conditions. During a rescue operation in the Mediterranean in May 2017, members of the Libyan coastguard approached a boat loaded with distressed migrants and intimidated the passengers by firing gunshots into the air. They came onto their boat to relieve them of phones, money and other belongings. We are told that members of the Libyan coastguard have received training and support from the EU. Evidence of that is not to be seen. I have read the testimony of a survivor who jumped into the water because he preferred to die at sea than to be repressed and to die in Libya.

During this year’s election campaigns in Europe, we are being reminded of the importance of core European values in the context of the political situation in Europe. Ireland was instrumental in developing the sustainable development goals as a member of the UN Human Rights Council. We are respected for our untied aid. We are trusted. I am proposing that the concerns I have expressed about the facts that are emerging from the migrant centres should be raised at this month’s meeting of the Foreign Affairs Council. Ireland, through the Minister of State with responsibility for EU matters, should speak up for the people who are being treated appallingly in these detention centres. If we do not do so, there is something seriously wrong with our moral and ethical values here and in Europe.

Minister of State at the Department of Foreign Affairs and Trade (Deputy Dara Murphy): I am glad to have an opportunity to address the House on this important matter. I thank Deputy Maureen O’Sullivan for raising it. I agree with her that everyone has been moved by the terrible images and distressing reports of men, women and children drowning in the Mediterranean. We all agree that such terrible and appalling incidents should not be happening on the doorstep of the EU in the 21st century. The migration crisis is one of the greatest challenges ever to face the EU. It has been discussed at almost every European Council meeting in recent months. It will be on the agenda for the next Council meeting later this month. It has been addressed by foreign affairs and justice Ministers on many occasions. The EU has responded to the migration crisis by adopting a range of measures to deal with this global mass movement of people. As Deputy O’Sullivan has said, it has engaged with countries of origin and transit to address the root causes of migration, for example through tailor-made migration compacts. This has involved the agreement of a plan to relocate migrants from Italy and Greece across the EU. Operation Sophia has been launched with the intention of disrupting people-smuggling in the Mediterranean. Substantial financial assistance has been provided to Libya and other countries that are hosting large numbers of migrants.

The past year has seen the main focus shifting from Turkey and Greece to the so-called south Mediterranean route which, as the Deputy mentioned, is the route from Libya to Italy. So far this year, approximately 59,000 people have made the journey. Tragically, the International Organisation for Migration estimates that 1,480 people have drowned.
In March, European Union Heads of State and Government set out the European Union’s commitment to assist Libya in the Malta Declaration. That commitment has quite a broad range of measures, including capacity building, training and the provision of equipment and support for the Libyan national coastguard and other agencies. It also seeks to ensure that there is adequate reception capacity in Libya for migrants, including by working with the UN High Commissioner for Refugees.
In April, a €90 million programme was approved to step up the protection of migrants, as the Deputy has described, and to reinforce better migration management in Libya. Some €4.8 million of that is aimed at protection activities and €42 million is aimed at socio-economic development at municipal level and local governance. This programme will be implemented through a number of international agencies, including the UN High Commissioner for Refugees and UNICEF. This is in addition to the €120 million already announced by the European Union for migration-related support for Libya to assist authorities and the population. The European Union will continue to closely monitor the migration situation in Libya to see what additional support is required. The reason for such targeted funding is an acceptance of the facts, as highlighted by the Deputy, that there was significant work and difficulty on the ground in Libya that needs to be addressed.

Deputy Maureen O’Sullivan: I thank the Minister of State. The facts I presented have come from reports and I have pictures, which I can show to the Minister. When he looks at them I believe he would say that drowning would be preferable to ending up in one of those detention centres. We agree these incidents should not be happening, but they are, so there is a need to rethink in this regard. There was horror in 2008 when a deal emerged between the former Prime Minister, Silvio Berlusconi, and Colonel Gaddafi involving a huge amount of money being paid so that Colonel Gaddafi would keep migrants in Libya so that they would not get to Italy, but the same thing is happening today. Some of the migrants have been in Libya for more than 20 years because they were oil workers. They are now in these detention centres.
How much Irish aid – which we are very good at – is going into these detention centres? The Minister of State mentioned vast sums of money, but where exactly is it going? Obviously, it is into the pockets of these criminal gangs who are abusing the situation. One of the replies we got to a parliamentary question stated that the policies are bespoke solutions to the migration problem. That is not good enough because we are fuelling so much pain, horror and, I believe, dissent, and we wonder why people are rebelling against these sorts of conditions.
With regard to the Libyan coastguard, it appears that nobody is in control so each individual coastguard has carte blanche to do what it wants. It is very important that international organisations get into these centres. That is one thing that Ireland could be very strong on at the next Foreign Affairs Council meeting. We have to speak out about these human rights abuses because that is what they are.
With respect to the Libyan situation in general, a suggestion was mooted that there could be a role for the Department’s conflict resolution unit and perhaps that could be examined, but we cannot stand by and allow the conditions in those centres to continue as there are, being funded by the EU and by Ireland.

Deputy Dara Murphy: The evidence the Deputy presented is not disputed. There is an acceptance there is very significant difficulty and abuse of civil and human rights of the people in Libya. Certainly it is going too far to say that any circumstance is better than drowning. We have seen the great work our navy has done.
On the Deputy’s specific point about how the aid and the programmes will be distributed, it will be through UNICEF and the UN High Commissioner for Human Rights. It is through their presence on the ground that the moneys are to be dispersed. As the Deputy said, there is not a government in Libya. Therefore, we must work to ensure that pressure can be brought to bear from the African Union, United Nations, the League of Arab States and the European Union, which are all working together, to encourage a process that has seen some limited progress to date but without an effective government in the country to guarantee and secure the human rights of people, it is extremely difficult.
This is not an excuse but it is a fact that it is only since April that this €90 million of funding has been approved to address the situation on the ground and to continue to work on the principle of working with countries of origin and countries of transit to ensure that people do not take, and are protected from being forced to take, these terrible perilous journeys that we see being taken. I accept that is a very late timeline given what we know to have been the case in Libya for a long number of months.