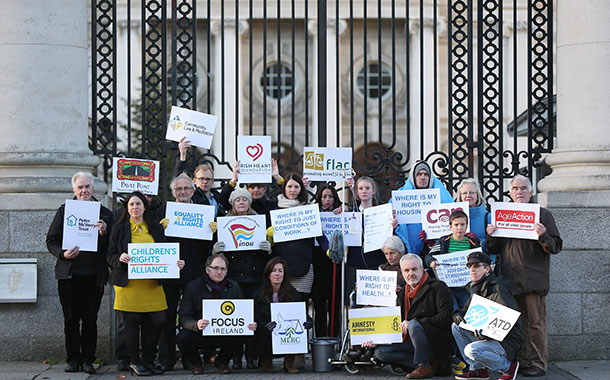 Thomas Pringle: “Since 1973 when Ireland signed the International Covenant on Economic, Social and Cultural Rights, ESC rights, and since its ratification in 1989, rights covered by this treaty have slowly and progressively been eroded by successive Governments intent on the ever increasing commercialisation of our public services. As we emerge from an economic recession, it is becoming ever more evident that every person has traded in something for this recovery at their expense. Most people do not know how to describe or understand what that something is and do not use the terminology we throw across the floor of this House but they do sense a general feeling of unease as if we are heading in the wrong direction, and they are right. What they are feeling is an encroachment of the commercialisation of many aspects of their lives, most vitally, the public services that provide basic security for people in this country and which they are fundamentally entitled to. Why is there such opposition to water charges, the property tax, closure of post offices and Garda stations, and cuts to bus services and health services, including mental health and disability supports? Not to mention the catastrophic housing crisis or, as I prefer to call it, crisis of inaction by this Government, caused by its reliance on encouragement of the private sector to fill the void of an ineffective Government housing policy and which has thrown people out into the streets and families into hotel bedrooms over the Christmas period.”

Maureen O’Sullivan: I attended a press conference organised by Deputy Pringle this morning at which Fr. Peter McVerry identified what he and many others believe are the basic human rights. Enshrining those rights in our Constitution will send the message that we value our citizens and want them to live fulfilled lives, reach their potential and function as active members of society. Enshrining these rights would show that we have a rights-based approach to legislation. If that had been done years ago, the issues facing the north inner city, as I outlined during Leaders’ Questions yesterday, would not have reached the devastating levels that developed over the years on foot of the lack of respect for the rights of people living in the north inner city. They are the right to adequate food, a right to health care, a right to education, a right to work and a right to housing. Housing is central because unless one has a decent house or home, one is not going to be able to eat adequately. It is going to be very difficult, if not impossible, to continue in education. It will be difficult to access or maintain a job. Poor and inadequate or no housing has detrimental effects on a person’s physical and mental health.

Thanks to Deputy Thomas Pringle, we are discussing an amendment to our Constitution. The first question is what a constitution is about. When I looked it up to be totally sure, I saw that it is a body of fundamental principles or system of beliefs according to which a state or another body is acknowledged to be governed. In effect, it controls the exercise of power. When I look at that definition, it makes perfect sense to me that human rights, economic, cultural and social, as contained in the International Covenant on Economic, Social and Cultural Rights should be in our Constitution. Ireland ratified that covenant in 1989 but we have yet to incorporate it into either domestic Irish law or the Constitution. Enshrining economic, social and cultural rights in our Constitution is an important step in the improvement of Irish society.

It also happened in other parts of Ireland. The common denominator was the lack of a human-rights based approach to policy and legislation so that some citizens and communities did not have the same rights to housing, education, a fulfilling lifestyle and a safe, pleasant environment as other citizens. Drugs were allowed to devastate those communities because the rights of the people living in them were not respected.
I turn to cultural rights. We are becoming increasingly multicultural and our Constitution needs to reflect that. The constitutional recognition of cultural rights would go a long way toward making new communities feel welcome and valued in Irish society. The recent recognition of Traveller ethnicity was a welcome step towards ensuring respect for minority cultures, but there are a lot of barriers to accessing education, housing and employment among Traveller communities which have to be addressed. Statistics from local authorities show that there are huge waiting lists and a number of Traveller families living in overcrowded or unsafe conditions. In terms of new communities, non-EU migrants are 11% more likely to be in poverty than Irish people. There are education barriers to those from new communities because their status has not been resolved. Those inequalities across cultural groups demonstrate the importance of access to the courts to remedy current inequalities. We had a very powerful presentation yesterday in the AV room on the consequences of the new International Protection Act and the reality of life for those living in direct provision. We heard repeatedly of the lack of concern for the asylum seeker and his or her rights. As one person put it, seeking asylum is not a crime.
There is a very definite scarcity of respect for human rights. I was struck by a quote from a US court of appeal that the denial of an opportunity to earn a livelihood is the equivalent of a sentence to death by means of slow starvation. Researchers tell us socio economic scarcity has a consistent effect on the human brain of limiting and distorting our skills and impairing our ability to think ahead or engage beyond the immediate circumstances of scarcity. This contributes to poverty cycles and in overall engagement with the wider world. If these economic, social and cultural rights were enshrined in the Constitution it would provide people with greater opportunities to become active citizens.
I was a member of the Constitutional Convention which voted overwhelmingly in favour of amending the Constitution to strengthen the protection of these rights. The Government responded to some issues from the Constitutional Convention but it did not respond to this, so it is overdue.