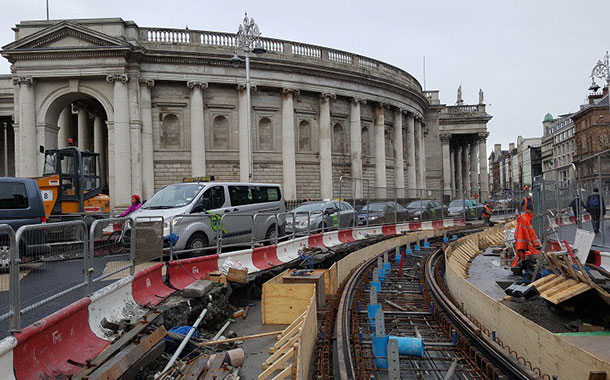 We hear about a traffic management plan for Dublin but, unfortunately, more often see the absence of traffic management. There is clearly a “lack of vision” but I do not think it is confined to this Government only as previous Governments have also shown a lack of vision. When we visit other cities and see their public transport, we find it is efficient and regular so people know it is coming, and it is also not costly. That is what encourages people to use it. And then we come to the traffic management when it comes to the Luas works. We had all of the disruption with the first Luas and then we went into years of disruption with the second Luas. Now, we are into more disruption while joining them up. A little forward thinking and a vision for the future would have prevented that!

When there is a problem, I fail to understand why we cannot prevent it from worsening by diverting traffic when it is possible to do so instead of allowing that problem to be exacerbated.

There have been a number of extensions, junction upgrades and widenings on the M50 over the years but there are times that this busiest road in the country is not fit for purpose. What is happening is that motorists are avoiding the M50 instead of it being used for the purpose for which it was intended, namely, as a ring road to pass around Dublin. Now, however, it is very much a commuter road linking the suburbs. I have previously asked the Minister questions about the need for an outer ring road.

Dublin Airport is the sixth busiest airport in Europe. Many cities in Europe have rail links to the city centre. I would make the point that we have excellent Aircoach cover and excellent bus services to the airport, as well as taxis, and I believe they are serving passengers very well. I think an opportunity was lost when the port tunnel was being developed in that there could have been a rail link with it. I want to acknowledge the service provided by Dublin Bus, particularly the cross-city service.

I would also like to mention the plans for the pedestrian plaza. I like pedestrian plazas but I am not too sure about this one around Trinity College, in particular when one wants to drive from the northside on O’Connell Street over to the southside. There have been elements of an anti-car agenda. What I saw in another city was that Sunday is traffic-free in the city centre and I would suggest that.

While I am all for people slowing down, the 30 km/h limit can be very difficult at times and, of course, it is not going to be of any use unless it is enforced. What will happen is that some people will obey the 30 km/h limit and they will be passed out by other motorists who are not obeying.
With regard to the commuter belt in neighbouring counties, there has to be realistic investment in rail and road transport.

I want to make one special plea regarding the canals. We always talk about walking and cycling along the canals but we are not looking at actually using them as a method of transport.

To conclude, while I am not being parochial, I think we need to look again at Dublin, where there is a need for a different advisory council for the city. It is the capital and has the biggest population and I believe we have to look at it in a wider context, with more joined-up thinking.