Latest
Home Local & National What other city comes to a standstill due to an M50 crash: New initiatives urgently needed 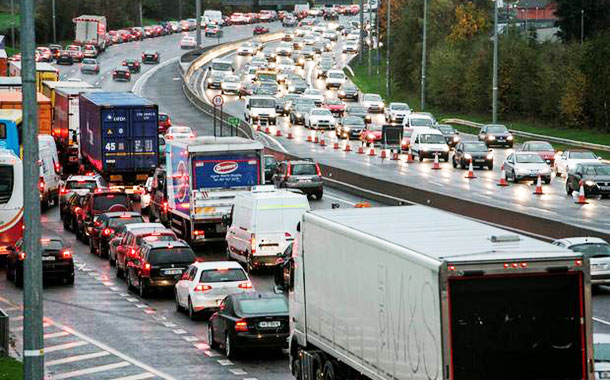 What other city comes to a standstill due to an M50 crash: New initiatives urgently needed

It is crazy that in a city with a metro area population of 1.3 million that the major road networks can come to a standstill with a closure to the Port Tunnel or a m50 crash. Dublin still lags behind many cities for access to rail public transport and we are statistically hugely reliant on buses and private cars for commuting.

More funding needs to be given to active modes of transport as well as public transport in general. While there is current improvements underway and large infrastructure programmes in the pipeline. We should be looking at other European models as examples of combining investment in active modes and public transport as currently we have a huge car and surface road dependence. First of all I asked the Minister for Transport for his plans to increase funding towards walking and cycling initiatives.

To ask the Minister for Transport, Tourism and Sport his plans to increase funding towards walking and cycling initiatives in line with reducing carbon admissions, improved health and less congested cities and towns; his views on whether active modes of transport should be prioritised for enhanced funding; and if he will make a statement on the matter.
- Maureen O’Sullivan.

Answered by the Minister for Transport, Tourism and Sport
Shane Ross
REPLY

I propose answering Parliamentary Questions 405 and 419 together.
Claims have been made in the recent past that out of the €10bn funding allocation my Department has received under the Capital Plan, only 1% is devoted to cycling and walking infrastructure and facilities. While €100m of my Department’s €10bn capital allocation is eamarked for Smarter Travel initiatives, this does not reflect the totality of funding for cycling and walking measures. In addition to the Smarter Travel funding, significant funding is also allocated for walking and cycling measures via programmes administered by the National Transport Authority (NTA) on behalf of my Department.

Under the Sustainable Transport Measures Grants (STMG) Programme, my Department provides funding to the NTA for the seven local authorities in the Greater Dublin Area for the implementation of sustainable transport measures which includes cycling and walking infrastructure. Funding of €23.2 million was allocated to this Programme alone in 2016. The NTA also manages a similar sustainable transport grants programme – the Regional Cities Programme – in the four regional cities of Cork, Galway, Limerick and Waterford. Overall funding for these two programmes in 2016 was €36.7.

In 2017, we will be investing 355m in public transport and sustainable transport infrastructure. Of this figure over 10% (more than €37m) will be allocated to Smarter Travel and Sustainable Transport measures. I am sure the Deputy was pleased to see, as I was, the significant increase in the numbers cycling and walking into Dublin City Centre in the Canal Cordon Report published last week. We are now seeing more than two thirds of people using sustainable transport modes (public transport, cycling and walking) to enter Dublin in the morning peak. It is important that we continue to build on that progress in the coming years.

The Government is embarking on a Mid-Term Review of the Capital Plan, which will take stock of progress under the Plan to date and provide the Government with an opportunity to consider the scope for increased levels of investment. In addition, with the scheduled completion of the Luas Cross-City Project later this year, which was one of the more capital intensive projects under my Department’s remit in recent yeas, I hope that more funds may become available to support cycle routes. I will certainly be making the case for increased investment in public transport and cycling and walking infrastructure in discussions on the review of the Capital Plan.

The Deputy will also be interested to know that my Department is presently establishing a fund to support low carbon technologies in public transport vehicles including a Green Bus Fund. These various initiatives demonstrate my Department’s commmitment to continued investment in infrastructure to support walking and cycling and in the development of clean transport technology.