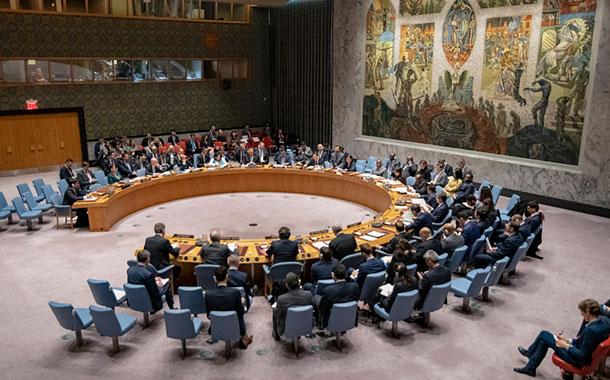 Deputy Maureen O’Sullivan: In a month, the Taoiseach, Ministers and officials will head around the world for St. Patrick’s Day. Over 300 venues around the world will be lit green for that day. That is some achievement and some recognition for a small country with a small population. One of the items on the agenda will be to secure the 192 votes necessary to get a seat on the UN Security Council.
Why do we want this seat? I know it was decided back in 2005. What will it cost Ireland? I am not just talking about euro to secure the seat. I ask these questions in the context of strange and, what I would call, “unIreland” decisions made recently. Will we see more of these types of decisions in order to get the seat?
I have two examples of these decisions. Our neutrality puts us in a strong position, enhanced by the reputation of our troops in UN mandated peace missions. Despite protestations to the contrary, that neutrality is under threat, whether that relates to Shannon Airport, permanent structured co-operation, PESCO, or EU battlegroups. We see this increasing drawing of Ireland into the European securitisation agenda. Some months ago, there was an overwhelming vote in the European Parliament on a report emphasising PESCO’s compatibility with NATO and that the EU should be capable of launching autonomous military missions.
My second example is the decision to recognise a self-appointed person as president of Venezuela whose previous role in the Venezuelan National Assembly was akin to that of speaker in other parliaments. This self-proclaimed president who is openly calling for violence on the streets. I was waiting for Ireland’s voice to condemn the sanctions, which have been causing the problems in Venezuela, as well as waiting for Ireland to condemn the threat of military invasion but, instead, Ireland joined European countries in condemning the Venezuelan President, Nicolás Maduro.
Are these the prices we are paying in exchange for votes for a seat on the UN Security Council? The organisation of which we want to be part has permanent members with unprecedented power to veto. We see the political games that go on between the three permanent NATO members and the other two members of the council. There is a litany of failures by the Security Council in making the world more secure. A former UN Commissioner for Human Rights spoke about the pernicious use of the veto leading to the most prolific slaughterhouses, referencing Syria, the Congo, Burundi, Myanmar, and before that, Biafra, Cambodia, Bosnia, Rwanda and Darfur. The most blatant recent example is Yemen. There was an initiative in 2014 to call on the five permanent members of the UN Security Council to voluntarily pledge not to use the veto in the case of genocide and crimes against humanity, which came to nothing.
Our unique voice is one that has been non-aligned, impartial and humanitarian focused. Why are we risking that for a seat on the UN Security Council, which has a serious democratic deficit and which might require us to make decisions not in keeping with a sovereign, independent republic?

The Taoiseach: I thank the Deputy for raising this important issue. As far as the Government is concerned, we will seek election to the UN Security Council for the 2021 to 2022 term. We have the support of almost all the Oireachtas in this regard. As a country, we have served on the Security Council in the past. I believe we have made a valuable contribution to the UN and the Security Council and we want to be able to do so again. Part of that is a reflection of our ambition to double Ireland’s global footprint and increase our influence around the world. Part of it is also about our commitment to multilateralism, precisely because we believe the greatest challenges and problems which the world faces are best dealt with by countries working together, whether through the UN or the EU. It is linked to our commitment to peacekeeping of which the House is rightly proud.
There is peacekeeping we have done with UN in places like Lebanon but also peace operations in which we have been involved through the European Union. These involved operations in Mali, which I had the opportunity to visit earlier this year, and the Mediterranean Sea, under Operation Sophia, where we have been disrupting human trafficking, people smuggling and rescuing migrants from the sea. Those were EU operations, not UN operations, and I do not consider them a violation of our neutrality. I am proud we have taken part in those missions in the Mediterranean Sea and Mali.
The fact we have increased our budget for international development this year by more than €100 million, striving to reach that target of 0.7% of GNI, speaks to our commitment to international development. We believe the best way to deal with many of the world’s problems is to build capacity, democracy, human rights and economic opportunities in developing countries. We are committed to that and we want to bring that vision and voice to the top table in the world.
It is also because of our commitment to free trade and free enterprise. Nothing has lifted more people out of poverty in the history of the world than free enterprise and free trade. We have seen in China and other Asian countries how hundreds of millions of people have been lifted out of poverty through free trade and free enterprise. We want to bring that voice to the top table of the world as well.
We also want to bring our voice and our commitment to human rights and equality to the top table, whether it is equality among the genders or LGBT rights. Ireland has a unique voice and perspective to offer in that regard. That is the backdrop to our decision to seek a seat on the Security Council.
We strongly support the people of Venezuela in their demands for free elections, as well as the restoration of democracy, human rights and freedoms, and economic opportunity. We have listened to the Venezuelan community in Ireland as well. I invite people to do that if they have not done so. There are always differences of opinion but the majority of Venezuelans in Ireland know exactly where they stand on this issue, and we should listen to them as well. In taking the decision to recognise a new interim president of Venezuela, we did so recognising the Venezuelan Constitution allows for an interim president to be elected by the Venezuelan Congress should the directly elected president be deemed illegitimate. We did so not on our own but alongside many other EU countries, including neutral ones, as well as the Lima Group comprising Canada and a large number of Latin American countries.

Deputy Maureen O’Sullivan: A Cheann Comhairle, perhaps you as speaker here would like to proclaim yourself President at some point and expect the rest of Europe to recognise you.

An Ceann Comhairle: I am okay where I am.

Deputy Maureen O’Sullivan: Ireland has a respected voice. It comes from our history, culture and the empathy we can bring to other countries because we have experienced famine, conflict and displacement. The Taoiseach mentioned his recent visit to Africa. That shows up the contradictions. In Mali, he visited Irish troops. Why are those troops part of an EU training mission, which could be seen as propping up France’s interests in Mali’s uranium resources? The Taoiseach then went to Ethiopia and was back to the traditional Irish role, Irish Aid, which is about the empowerment of women, rural development, social protection and health. We are in danger of losing that respected voice, which we have because of our positive relationships with other countries. There are more appropriate arenas in which Ireland can keep up that reputation and good name, not the UN Security Council and not at the price we appear to be paying to get those votes.

The Taoiseach: I am not sure the Deputy meant the way that came across. We are not paying for any votes. That is not at all what is happening. I have a thick skin but I hope that our hard-working diplomats in the UN and around the world do not take that the way the Deputy said it. Perhaps it is not the way she meant it.
In terms of philosophy, I do not see a conflict between being involved in peacekeeping and peace support operations on the one hand and international development on the other. I see what we do in Mali and Ethiopia as mutually complementary. International development is worth nothing without security, and security will never last without international development, economic opportunity and freedom for people. I see these things working together. We can do nothing for the refugees fleeing Eritrea in the camps in Ethiopia without having security in Ethiopia and Eritrea. They have to go hand in hand – security as well as international development, democracy, human rights and economic opportunity. I do not see a conflict there. It would be an error of philosophy in foreign policy to say that we will only be involved in international development, but if guerrillas come in or an offensive government comes in, overruns and sets fire to all our projects and knocks down the schools, we cannot say we do not care. That is not what we do.