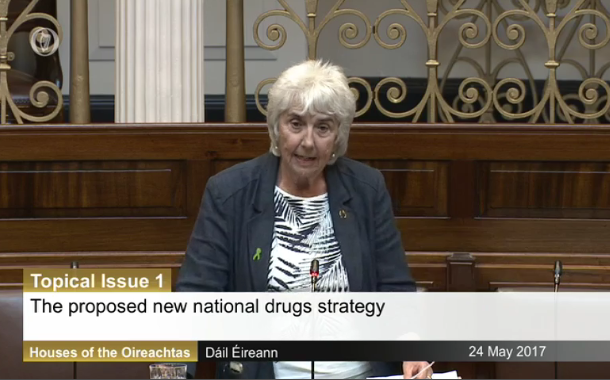 Deputy Maureen O’Sullivan: I am glad to have the opportunity to discuss the proposed new national drugs strategy. It is disappointing that the Minister of State, Deputy Catherine Byrne, was not available today or tomorrow. There are to be meetings with the community and voluntary sectors in respect of their concerns about the new strategy, which have been brought to her attention. As she is dealing with those concerns, it is opportune that I can highlight the issues today and put them on the Dáil record.

I acknowledge the commitment of the Minister of State, Deputy Catherine Byrne in this area. There is a need for urgency on the part of the Government in respect of the new strategy. It must show that it is really committed when it comes to addiction. It was in Dublin Central, in the north inner city, that heroin appeared first in the late 1970s and the 1980s. The late Tony Gregory played a central role in the community response to its emergence. The north inner city led the way in taking an inter-agency approach to drugs through the local drugs task forces. Under that approach, statutory representatives from justice, including probation services and the Garda, the HSE, education, social protection including FÁS and community employment schemes and the local authority were all at the same table as community and voluntary sector representatives. The projects which work directly with those in addiction are in the voluntary sector.

When it works, that model is the best approach. It works when there is real commitment on the part of all the participants. The problem is that recent years have seen a slow erosion of State support and interest. For the new strategy, the Government must ensure that all the relevant Departments and agencies are active along with the voluntary and community sectors. Progress is being made at present, for example, in respect of medically supervised injecting rooms, tablet regulation – although that took a long time – the work of the Garda in tracking the proceeds of crime at local gang level and in opening the debate on decriminalisation. However, the new strategy has to prioritise actions targeting the communities most affected. The evidence and statistics identify those communities; they are the communities of poverty, educational disadvantage and unemployment, which suffer serious drug intimidation.

We need to re-examine the use of the terms “prevention” and “education”. I think the terms “intervention” and “awareness” are more relevant today, especially if the new strategy supports the programmes the community and youth organisations are carrying out in this area. Those programmes could be expanded into schools and into Youthreach. There is a need for programmes that will develop the critical thinking abilities of young people.

The young people’s facilities and services fund was a highly significant tool in the prevention and education arm of the strategy and it is illogical to discontinue it without a viable alternative. Its focus was those young people most affected in areas of economic and social disadvantage. For most of the years, the fund had regular monitoring to ensure the money went where it was supposed to go.

The new strategy also needs a clear implementation structure, timeframes for the various aims and objectives and clear roles for all of the players, statutory, voluntary and community. The necessary resources must be provided to really make a difference. Timely access to treatment for those in addiction is needed. The new strategy must also be clear and unequivocal in addressing alcohol. There are agreed recommendations in the substance misuse strategy. It needs to consider seriously specific communities such as the Traveller community, ethnic and new communities and the LGBT community. The voices of drug users must also be included in improving and supporting services.

Will the new strategy be brought to Cabinet before the summer recess? With the change in Taoiseach and a possible Cabinet reshuffle, where will the strategy stand?

Minister of State at the Department of Health (Deputy Helen McEntee): I thank Deputy Maureen O’Sullivan for raising this important issue. I agree that we need to treat the matter with absolute urgency and assure the Deputy of the Minister of State, Deputy Catherine Byrne’s commitment to it. As the Deputy is aware, a steering committee chaired by John Carr, former secretary general of the Irish National Teachers Organisation, was established in December 2015 to provide advice and guidance on the development of a new national drugs strategy, to take effect from 2017. The steering committee has spent almost 18 months developing the new policy. The process involved an extensive and comprehensive public consultation; a rapid review of the 2009 to 2016 strategy; the development of strategic actions through four key focus groups and a systematic review of international evidence on drugs interventions by the Health Research Board. I understand that a meeting to sign off on the final report of the steering committee will take place tomorrow, as the Deputy mentioned.

The Deputy will appreciate that it is a matter for the steering committee to deal with any outstanding issues in the context of finalising the report. However, I can outline in general terms the key issues which the Minister of State, Deputy Catherine Byrne, believes will be addressed at tomorrow’s meeting. Regarding alcohol, my understanding is that the new policy will provide an integrated public health approach to substance misuse, which includes alcohol and illegal drugs. I am advised that the new policy will incorporate key actions from the national substance misuse strategy and provide a range of new actions, which will take account of other Government policies and strategies that address the risk factors for substance misuse. It is also expected that the new strategy will build on work undertaken by drug and alcohol task forces to raise awareness of alcohol-related harm within the community.

I have been informed that the new strategy will contain a specific objective aimed at building the resilience of communities to respond to the drug problem. This objective will also focus on communities affected by gang-related crime and the menace of drug-related intimidation, which the Deputy has raised. I am aware that some people living in these communities may be afraid to report drug-related intimidation due to fears of reprisals. For this reason, encouraging people to report drug-related intimidation by strengthening the existing reporting frameworks will be an important aspect of the new strategy.
Maintaining the focus on services for at-risk young people will also be important in order that they can avail of opportunities to participate constructively in community life. Finally, robust national structures will be needed to provide leadership and direction to ensure the effective implementation of the new strategy. All sectors will need to play their part in making the new structures successful, as no single Department or agency can solve these problems on its own. Measuring the collective input of all concerned and improving the performance of the different partners over the lifetime of the strategy will be supported through a new performance measurement system.

I understand the steering committee is expected to submit its final report on the new strategy to the Minister of State, Deputy Catherine Byrne, shortly. The next stage will be to bring the Minister’s proposals on the new drugs strategy to Government, with a view to launching the policy before the end of the summer.

Deputy Maureen O’Sullivan: I thank the Minister of State. I note the response is very general. While we will need to see the specifics, the most important thing is that the community and voluntary sectors will be able to sign off on it tomorrow. The community drug projects play a vital role with some really innovative programmes. They respond to needs as they are presented and were not getting the role they should have been given in the strategy. The evidence is that they are successful in supporting those continuing in addiction and those who are in recovery. Many of those projects are delivering in very difficult circumstances and are being swamped by paperwork. They are on the edge all the time when it comes to funding. I would be interested to learn what are the specific actions in respect of drug-related intimidation because the new strategy needs substantial actions to address this problem.

I have mentioned the Recovery Academy of Ireland to the Minister of State, Deputy Byrne, previously. It is innovative and encouraging and is keeping people in recovery. Its latest move is pop-up recovery cafés, which are a great idea. I met One Step Clinic recently. It is looking for a pilot programme into the naltrexone implant, which is non-addictive, cost effective and very useful in coping with addiction.

I am aware that the Minister of State, Deputy David Stanton, is working on the gambling aspect. I stress that we need to look at addiction in a holistic way and in its entirety. Alcohol had been left out of the drugs strategy for so long and the same is true of gambling.

Deputy Helen McEntee: It is my understanding that the submissions have been taken on board. I will check why they were not acknowledged. In respect of the community groups and in particular the drug and alcohol task forces, I know myself how important they are. In Meath and Louth we have a community group that works together and a drug and alcohol task force. I know some of the members personally and am aware of the sheer commitment that is there. They come from various strands of our society and that is why it works well.

I have spoken to the Minister of State with responsibility for this. She is absolutely committed to ensuring that they are happy with the strategy, that they have their say and that there is no sign-off until everyone is satisfied. The only way this strategy will work is if there is co-operation, if people work together and if everyone who has done the work to date is happy with how things move forward.

Deputy Maureen O’Sullivan has made several suggestions. Work is ongoing and there will be a presentation tomorrow. Everything will be taken on board by the Minister of State.